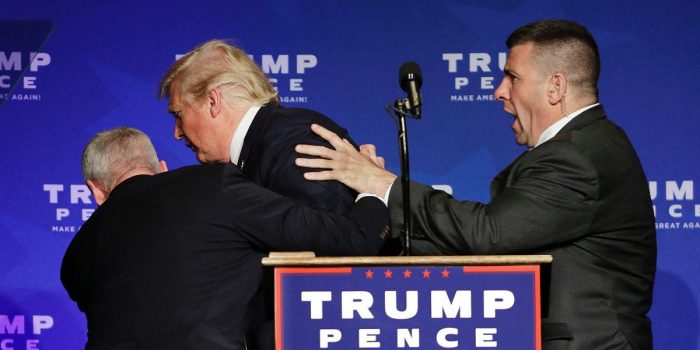 Feel like fearing for our country’s future? Check out the video below.

That’s presidential candidate Donald Trump being hustled off the stage by the Secret Service. A person in the crowd was taken down by law enforcement. All of this went down at tonight’s rally in Reno, Nevada.

So did someone really intend to kill Trump, or what? Thanks to the Secret Service, we didn’t have to find out. But at least one audience member thought the disruptive party was armed:

Listening to the audio, you can definitely hear people in the crowd yelling, "He's got a gun!"

One witness tells me he thinks that a folded up poster or sign that he saw the man holding was misidentified as a weapon, sparking panic.

A Homeland Security official confirms the @ABC report: no gun found, crowd panicked as a guy tried to raise a sign; someone shouted "gun."

Details are a little sparse right now, but most major outlets seem to be going with the “no gun found” detail, citing various law enforcement sources that, shockingly, Indelegate does not have access to.

Trump went back on stage, so it appears that whatever threat there was, the Secret Service considers it to be over. That doesn’t necessarily mean this wasn’t a deadly serious moment, though.

The election is in two days. Think we’re gonna make it?