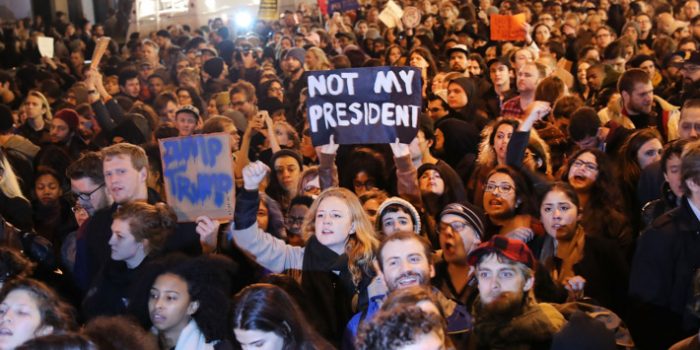 Donald Trump has been President-elect for a few days now, and those two days have been surprisingly free of conspiracy theories and vitriol. So, despite large-scale protests, maybe there’s hope for a unified country after all. Let’s just check his Twitter one more time and – oh.

Just had a very open and successful presidential election. Now professional protesters, incited by the media, are protesting. Very unfair!

The idea of “professional protesters” is something that the Trump campaign has gotten some mileage out of before. Hiring protesters isn’t a mainstream tactic, but there is some (heavily disputed) evidence that Hillary Clinton’s campaign did so. But if Clinton is still paying protesters days after conceding the election, then the Democrats are even less fiscally responsible than we thought.

As for the “incited by the media” bit, it’s the latest shot fired in Trump’s ongoing war with the press. Trump broke precedent again by not allowing the media to film his arrival to the White House, and he’s already bucked free press traditions in a wide variety of ways, including refusing to release his taxes and banning the Washington Post from embedding reporters with his campaign.