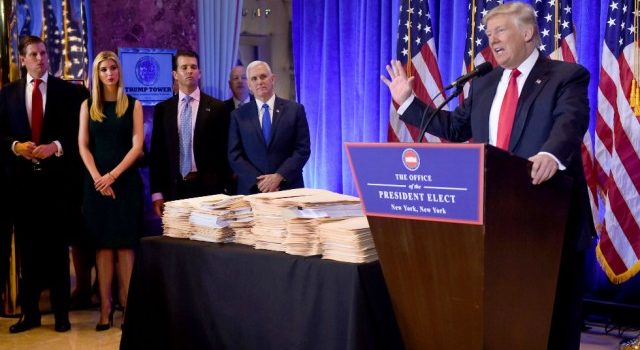 President-elect Donald Trump gave his first news conference in five months yesterday, and it was quite a scene. When he wasn’t calling CNN “fake news” and claiming that he could run his company and the country simultaneously “if [he] wanted to,” Trump found time to show reporters a huge stack of papers in manila folders.

The papers were “some of the many documents I’ve signed turning over complete and total control,” the Donald explained. But, my friends, that may have been some FAKE NEWS:

The pages are blank. pic.twitter.com/agLqnBTjrg

It’s impossible to say for sure, but the folders really look like they’re full of blank printer paper. There ought to be page numbers in the corners of these huge documents, but there’s no sign of any. It seems rather unlikely that every document happened to be flipped around in just the right way to hide things like page numbers, headers, and footers. There are no wrinkles or gaps that would suggest they’d been flipped through, read, or signed.

A bunch of people chimed in on Twitter and spoke with assumed authority, but nobody really said anything that convincing one way or another, so I’m not going to insult you by embedding a bunch of nonsense tweets here.

Anyway, we’ll never know for sure, because reporters were not allowed to look at the contents of the folders. So just use the photo above and, to borrow a phrase, decide for yourself about allegations about the president-elect that have circulated at the highest levels of Twitter.