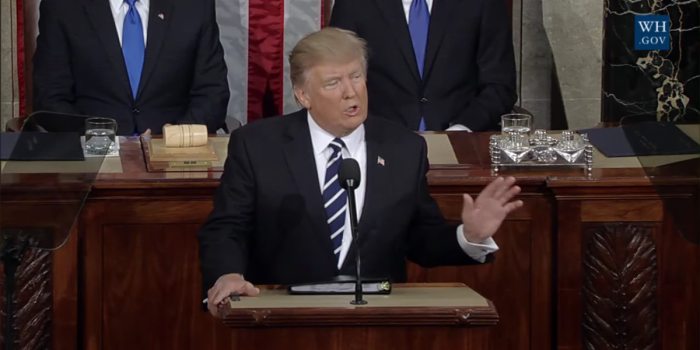 President Donald Trump gave his not-State of the Union speech tonight, and it was fine.

Trump began his speech by condemning crimes against the Jewish and immigrant community – a big moment given that he’s had some issues with striking the right tone on this kind of stuff in the past. He went on to give a speech that was fairly upbeat and forward-looking. That’s the kind of speech we expected (but did not get) at the inauguration, and a speech that, until now, Trump hasn’t really shown himself to be capable of giving.

The speech wasn’t an all-timer, but it’s fair to call this the best speech of Trump’s (relatively young) political career, at least by any traditional metric.

Here’s the full speech (rewind to -1:17). If you were hoping Trump was going to go off the rails, I’m sorry for your loss – read this or this instead.

Be the first to comment on "Trump Gives Pretty Okay Speech"