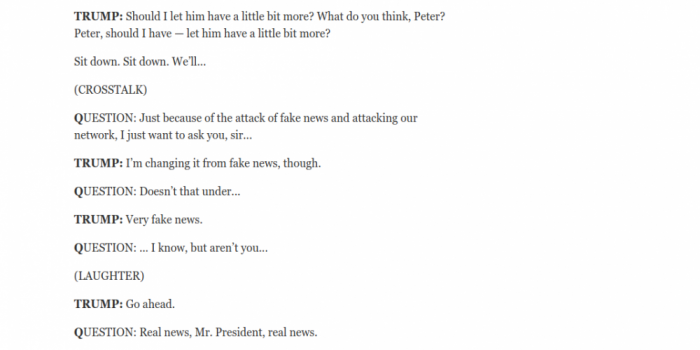 President Donald Trump gave a press conference today. It did not go well.

In a rambling press conference, Trump announced his pick for Labor Secretary (Alexander Acosta, who is fine – the pick was by far the most sane thing about this press conference), and went on to discuss everything from gun violence in Chicago to his own sexual assault accusations – which for some reason Trump brought up voluntarily.

If there was a headline in this mess, it was Trump’s comments on Flynn. Trump confirmed that he asked for and accepted Flynn’s resignation. In literally the next sentence after that, Trump said “he didn’t have to [resign], because he did nothing wrong.”

It’s all just “fake news,” Trump said. The real concern, in Trump’s view, is the fact that Flynn’s transgressions (which, remember, are “fake news” anyway) leaked to the media. Hence, the leaks are real and a problem, but the things being leaked constitute “fake news” (are you following this?).

Also, Trump said he “would have directed [Flynn] to do it [talk with foreign powers, including Russia] if I thought he wasn’t doing it,” but also Trump did think Flynn wasn’t doing it, and still doesn’t think Flynn did it, because the accusations fake news even though the leaks are real. Please try to keep up.

Here’s the full press conference. Trump starts speaking at 35:30. The shit really hits the fan when he begins to take questions at 59:20. You can read a full transcript here.

Another highlight: Trump’s take on Russia. “The greatest thing I could do is shoot that ship that’s 30 miles offshore right out of the water. Everyone will say, ‘Oh, it’s so great, it’s so great.’ That’s not great.”

It is correct that that is not great, so please do not do that, Mr. President. Because that would bring about – wait, Trump has a quote for this, too. “Nuclear holocaust would be like no other. They are a very powerful nuclear country and so are we.”

At one point, Trump wanted to know if a reporter thought that the election had been a “very substantial victory.”

“You’re the president,” the reporter replied.

Trump also announced that he was changing CNN’s designation from “Fake News” to “Very Fake News,” which, to be honest, is pretty funny even though we’re all going to die.

“I’m not just ranting and raving,” the President said.