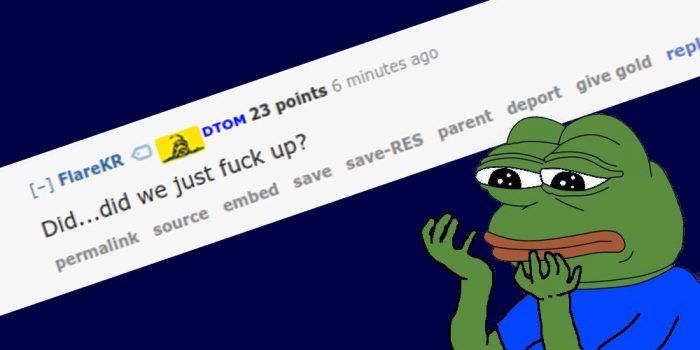 President Donald Trump has upset a lot of people in his three months in office, but there has been one group he has consistently failed to alienate: the loyal group of “centipedes” over at Reddit’s r/the_Donald. That changed last night.

For the uninitiated, r/the_Donald is one of two online message boards known for having a highly active alt-right community (4chan’s /pol/ is the other). r/the_Donald is a sub-community within Reddit, which also contains subreddits for everything from the NFL to memes based on the Star Wars prequels.

r/the_Donald has been firmly in its namesake’s corner since the start of the 2016 election cycle, and they’ve contributed a great deal to our Monday Memes posts. They’ve also clashed consistently with Reddit’s administrators over racially charged content and have moderators who freely ban dissenters, preserving a safely pro-Donald space (moderators are unpaid users who oversee subreddits; admins work for Reddit).

That space got a lot less safe yesterday, when millions of centipedes cried out at once and were suddenly cucked. Here’s how it happened.

The trouble started when r/the_Donald got a little too far ahead of itself. Following yesterday’s horrific Sarin gas attack, alt-right news outlets and popular right-wing conspiracy sites began questioning the nature of the attacks. Mike Cernovich (the Pizzagate guy) and Dilbert creator Scott Adams (who has a really wild alt-right blog, but that’s post for a different day), among others, argued that Syrian President Bashar Al-Assad did not really gas his own citizens. It made no sense, they argued, since Al-Assad is in a position of strength in Syria right now. Why risk the ire of the United States?

From there, the more conspiratorial outlets jumped to the “logical” conclusion: the Syrian gassing was a false flag, and was actually perpetrated by the hated “Deep State” – unelected government officials who, in the minds of conspiracy theorists, are the real folks in charge. Obama was behind it, in some accounts, and the fact that Hillary Clinton voiced support for the idea of striking the Syrian airfield cemented this narrative for many alt-righters: the Syrian attack was either a hoax or a false flag, designed to lure Donald Trump into a globalist regime-change type war of the sort that George W. Bush and Hillary Clinton and other alt-right enemies adore. By mid-day, r/the_Donald was pretty much on board with this version of events, which by then was being extensively laid out by conspiracy theorists over on /pol/.

And they weren’t too worried about Trump being “fooled.” Trump, users frequently assert, is playing “4-D chess” while others play checkers. r/the_Donald had it all figured out, so Trump must have, too. Though he may do a bit of posturing following the gas attack, he would never, ever be so foolish as to bomb Syria.

And then he did it, and r/the_Donald lost its shit.

It was brother against brother out there, my friends – ‘pede against ‘pede.

r/the_Donald has handled policy pivots before, and they’ve certainly never had an issue with things like contradictory tweets. But foreign intervention appears to have been a bridge too far for many.

Not coincidentally, many of the alt-right outlets mentioned earlier also broke with Trump on this issue. Trump took heat on Twitter from everyone from Cernovich to David Duke, and many of the_Donald’s most trusted conspiracy sites were horrified by Trump’s decision. Gizmodo has a good breakdown of this over on their site.

Equally horrifying to r/the_Donald users is the fact that centrist Democrats and mainstream Republicans are rallying to back the President: r/the_Donald hates Hillary Clinton and John McCain with a passion, and comments during the fallout mentioned them frequently.

Others supported the president as only r/the_Donald people can.

Leeroy Jenkins is a meme, but not a very good one.

To r/the_Donald users, the question that kept coming up was: is this still 4-D chess? Some said yes!

NARRATOR: He did not explain this.

Others had grave doubts about how many dimensions Trump was, in fact, playing chess in.

McCain and Obama, yukking it up again.

In the chaos, some reached desperately for the comfort of conspiracies.

And what about the mods? r/the_Donald users were livid that the issue was not given a “sticky” – a post that stays atop the subreddit, regardless of how popular it becomes. Others sought direction from their leaders.

This guy got his answer: many of these comments are now deleted. This is still r/the_Donald, after all. But as the comment graveyard piled up around them, many more were still flooding in. Loyalists decried the critics as “concern trolls” – a term meaning a subversive troll who pretends to be sympathetic but is actually there to seed doubt from within – and “CTR” or “ShareBlue” (sometimes, in r/the_Donald parlance, “ShariaBlue”) “shills” – people paid by Clinton, George Soros, and other liberal boogeymen to bring down message boards like r/the_Donald. In the collective mind of r/the_Donald, bringing down a pro-Trump subreddit is very high on George Soros’ to-do list.

But many of the dissenters encouraged others to check their post histories, and did indeed appear to be genuine members of r/the_Donald until yesterday’s fateful decision.

A semblance of normalcy has crept back into r/the_Donald as of this morning, and new conspiracy theories have already begun to replace the old. One popular take is that the Syrian strike was all for show – having warned the Russians, Trump knew the Syrians would move anything vital out of the way in time. Thus the strike placates dumb-dumb neocons while not actually pissing off Russia or harming Syria. That’s a big relief to the folks at r/the_Donald. 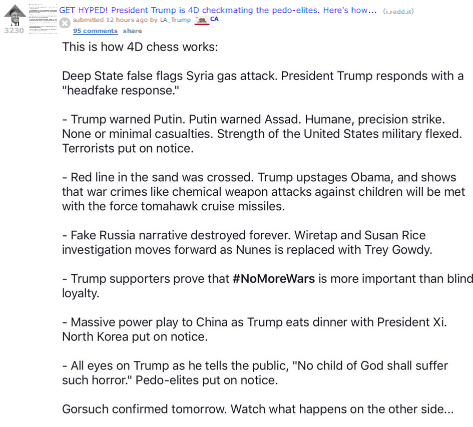 r/the_Donald clearly lost some subscribers – deleted comments from presumably banned accounts abound in its comment sections – but it is still growing, and today’s posts are all very pro-Trump. r/the_Donald may not be great again, but it has survived its first major break with its namesake.