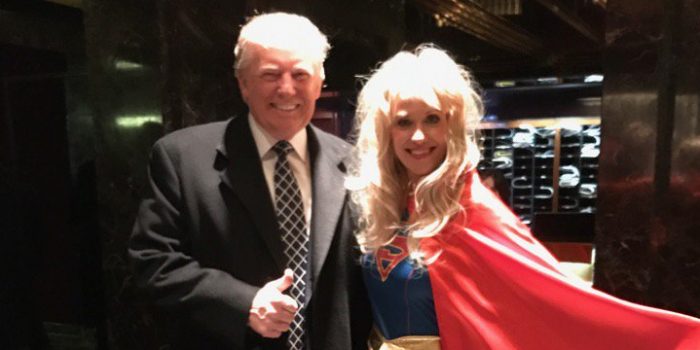 President-elect Donald Trump attended a costume party on Long Island the other night with the theme “superheroes and supervillains.” He did not wear a costume.

The party was was on Long Island’s North Shore, where it’s apparently normal to have costume parties in December. It was hosted by Trump transition team member and super rich person Rebekah Mercer in her mansion.

When a pool reporter asked Trump if his lack of costume meant he was a superhero or a supervillain, adviser and former Trump campaign manager Kellyanne Conway popped out of Trump’s car and said “a hero, all the way!” before Trump could say whatever the heck he was going to say to that question.

The underrated part of this story is that Kellyanne Conway was dressed as Supergirl:

Solid costume! Based on the costume and hair, that looks like a post-Crisis Supergirl to me – the one who is technically an artificial life-form and who falls in love with billionaire supervillain Lex Luthor, who later ran for president and won.

Be the first to comment on "Trump Attends “Superhero and Supervillain” Costume Party, Goes as Himself"