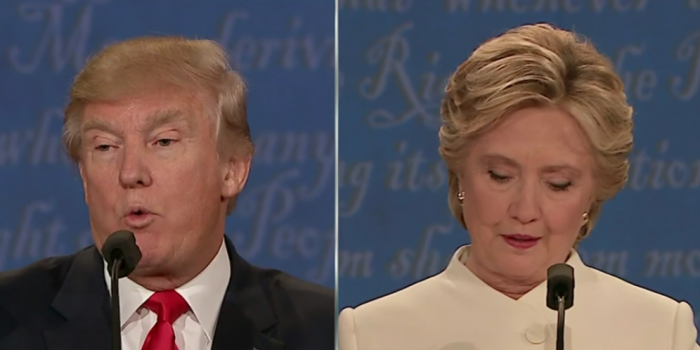 We’re real late on this, sorry. Here’s all the crap that happened at the third presidential debate.

Who won the third debate?

Hillary Clinton made it a clean sweep of 2016 debates by netting this third and final victory. This was, however, by far the closest of the debates. It wasn’t a total nailbiter, but it was Donald Trump’s most polished debate performance by a country mile, and Hillary had to pull the victory out by more traditional metrics rather than relying on Trump shouting “wrong” at the moderators over and over. So that was kind of cool.

You could even argue that Trump was legitimately winning this round through about a half an hour of debating. But in the latter two thirds of the debate, he got back in touch with old inflammatory Trump. His refusal to agree ahead of time to respect the results of the election was the clear headline of the night, though his decision to call Clinton a “nasty woman” was a solid runner-up.

This was a big chance for Trump to convince his conservative opponents to vote for him on Supreme Court nomination grounds, and he did a pretty good job. Trump hit the right conservative notes, describing his potential nominees as pro-life, pro-Second Amendment folks with “a conservative bent” who would interpret the Constitution “the way the founders wanted it interpreted.”

The Supreme Court discussion segued easily into the gun debate. “I understand and respect the tradition of gun ownership that goes back to the founding of our country,” Clinton said, before going on to describe how she wants to “reasonably limit” gun ownership.

Trump jumped at the chance here to paint Clinton as anti-Second Amendment and to cite his NRA endorsement.

Abortion also came up in the context of the Supreme Court. Trump avoiding being pinned down too much on whether or not overturning Roe v. Wade was a goal, walking a fine line between saying it “would happen” if his judges were confirmed while not quite saying it would be a litmus test or explicit goal of his judges. Trump also emphasized that abortion laws would “go back to the states,” leaving the door open for abortion to be legal in some parts of the country.

Clinton was unequivocal in her support of Roe v. Wade and used the opportunity to bash states that use legislation to chip away at the decision.

Trump had a grand time with his signature issue. “We’re getting the drugs, they’re getting the cash,” he declared, painting illegal immigrants as a security threat.

Clinton used an anecdote about a girl fearing that her parents would be deported, and painted a frightening picture of Trump’s proposed “deportation force,” describing the force as going from “school to school, business to business.” She described this nefarious force as “putting them [immigrants] on trains.” That evokes a rather specific historic event but, hey, She’s Not Saying, She’s Just Saying.

Trump went on the attack here, accusing Clinton of voting for a border wall before opposing his (her vote was on a very different type of limited barrier, not a full border wall) and referencing massive deportations under Obama (by the way, Twitter, he said “big league,” not “bigly”). He referenced Clinton’s leaked dream of “open borders.”

Clinton counterattacked by calling out the source of that “open borders” quote – Wikileaks – and calling Trump “Putin’s puppet.” That’s a heck of a thing to say in a presidential debate, and it probably would have been the headline if Trump hadn’t topped it a little later on (stay tuned).

Taxes and the economy

No big surprises here. Hillary beat the middle class drum, while Trump accused her of wanting to “double your taxes.” Clinton countered that she was not raising tax rates for anyone making under $250,000.

Clinton praised President Obama’s handling of the Great Recession. Trump cited a recent jobs report to claim that the U.S. is “stagnant.” He stoked fears of overseas competition, saying products are “pouring in from China, Pouring in from Vietnam, pouring in from all over the world.”

Trump called the sexual assault accusations “pure fiction” and “largely debunked.” He accused Clinton of being behind the wave of accusations: “I think it’s [Hillary’s] campaign.” Clinton fired back by bringing up Trump’s campaign trail statements about his accuser’s attractiveness (“would not have been my first choice”).

Clinton was asked about leaked emails that appeared to show a “pay to play” arrangement with some Clinton Foundation donors. Clinton pivoted and praised her State Department and the Clinton Foundation’s good works. Trump challenged Clinton to return donations from Saudi Arabia.

Clinton opened fire on Trump’s own charity, which has been caught doing some fairly shady stuff. Trump claimed that “100%” of his charity’s money goes to charitable causes.

In by far the biggest moment of the night, Trump refused to commit to honoring the election results. “I will look at it at the time,” Trump said. Clinton should “never have been allowed to run” and the media is “poisoning the minds of the voters,” Trump explained.

The Iraqi anti-ISIS offensive in Mosul doesn’t thrill Donald Trump, who said that the timing of the months-long military campaign was a conspiracy to help elect Hillary Clinton. “They want to look tough,” Trump said. “They want to look good for the election.” Trump also said Mosul was going to be a “wonderful thing for Iran.” He took the opportunity to bash the Iran deal while he was on the subject.

Clinton brought up Trump’s endorsement of the war in Iraq, and Trump denied it. Not too much else going on here.

Aleppo and Trump’s comments in the last debate

Moderator Chris Wallace tried to pin down Trump on his statement last debate that “Aleppo has fallen.” Trump defended the statement: “What do you need, a signed document?” Trump went on to say that Assad is “much tougher, and much smarter, than [Clinton] or Obama.”

Trump and Clinton tangled in predictable fashion over this issues before Trump delivered the other headlining quote of the night. While Clinton wonked out a bit over her plan to add more money to the Social Security Trust Fund, Trump interrupted to call her “such a nasty woman.” Ladies and gentlemen: 2016.

So, Uh, How Was Your Weekend?