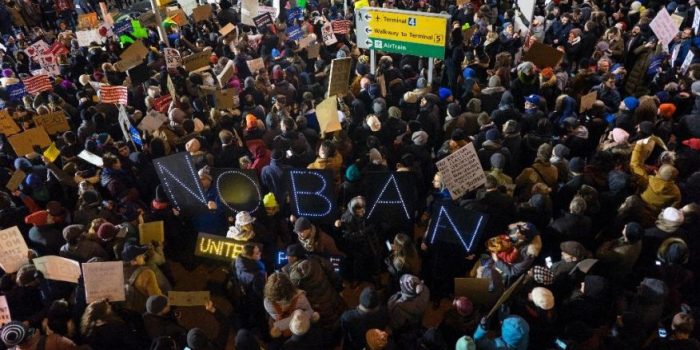 Another weekend, another massive nationwide protest against President Donald Trump.

Trump campaigned on a “Muslim ban” (though he later walked it back to “extreme vetting”), but a few details of his new order were a big surprise

First, there’s the fact that the order affects dual citizens. As expected, a citizen of (for example) Iraq can’t enter under Trump’s order. But more surprising is that (again, for example) a dual citizen of Iraq and Canada who has lived in Toronto for 50 years can’t visit the American side of Niagara Falls.

Stony Brook U student Shahar was just informed by Customs that her Iranian parents will remain in custody at JFK until at least tmrw morning pic.twitter.com/QsqpCNWvgX

Second, and most important, is the inclusion of those holding green cards. Green card holders are legal permanent residents of the U.S. and have already been thoroughly vetted. The real-life horror stories are already out there: students stranded on one side or the other of the U.S. border, permanent residents stuck outside because they were at funerals or weddings when the order went into affect, families that can’t visit each other any more.

Trump’s order met with widespread protests at airports and in cities all across the United States. Immigration lawyers showed up to help detainees, and New York City taxis boycotted JFK airport. Uber broke the boycott and got shamed by a bunch of people on Twitter. Some Republicans spoke out against Trump’s decision, though most were silent. Trump watched Finding Dory, and then Press Secretary Sean Spicer said he totally didn’t.

Stay tuned for whatever we’re protesting next weekend.

Be the first to comment on "So, Uh, How Was Your Weekend?"