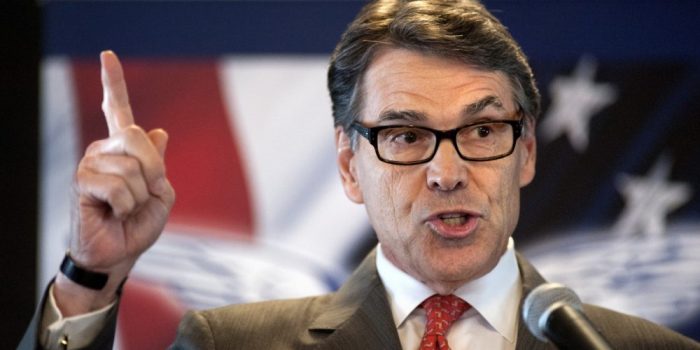 Here comes The New York Times with a pretty funny (and seemingly unsourced) allegation. Check it out:

When President-elect Donald J. Trump offered Rick Perry the job of energy secretary five weeks ago, Mr. Perry gladly accepted, believing he was taking on a role as a global ambassador for the American oil and gas industry that he had long championed in his home state.

In the days after, Mr. Perry, the former Texas governor, discovered that he would be no such thing — that in fact, if confirmed by the Senate, he would become the steward of a vast national security complex he knew almost nothing about, caring for the most fearsome weapons on the planet, the United States’ nuclear arsenal.

Ha ha, holy shit! What are you doing, Rick? If you’re going to take an important cabinet position, at least Wikipedia it real quick first. Rick Perry is far from the only person who assumes the Department of Energy deals mostly with, uh, energy, but this just goes to show that it’s always important to double-check.

On the other hand, you have to give Rick Perry credit for somehow acing a job interview while not realizing what the job was. Not bad!

Good luck to Rick Perry in handling all of that nuclear material. Here’s that video of him doing the cha-cha, again.

Man, I can’t get enough of that video. See you all in Hell.

Be the first to comment on "Rick Perry Didn’t Know What Job He Signed Up for, Apparently"