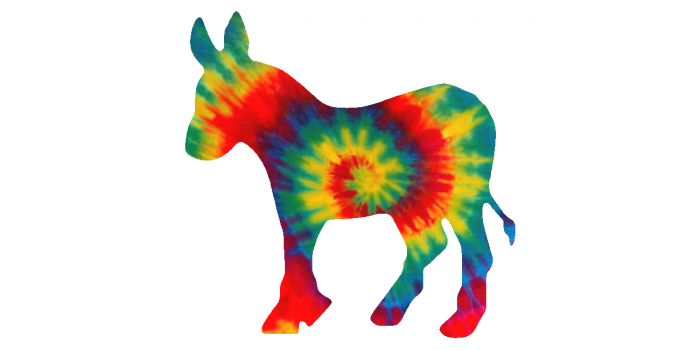 To beat Donald Trump, Hillary Clinton needs the democratic base – including the significant minority of voters who would have preferred to see Bernie Sanders as the Democratic nominee.

And Clinton is winning those voters, despite early fears that Bernie’s crew might never embrace her. Is that because platform changes helped establish Clinton as a “true progressive,” supporting causes similar to those that Sanders and other hyper-liberal lawmakers, like Elizabeth Warren, champion? Or is it simply because the “true progressives” in the Democratic Party were never actually that numerous?

It’s hard to say for sure how large the progressive wing of the Democratic Party is, but there are a few reasons to believe that it’s much smaller than primary and post-primary media coverage has implied.

First, let’s look at the final vote tallies for Clinton and Sanders:

This looks reasonably close at first glance, but it’s a pretty healthy margin for a two-person race. The delegate count graph looks similar, but it’s important to note that Democratic primaries tend to look closer than the Republican ones because the Republicans use winner-take-all or winner-take-most rules in their primaries, while the Democrats always use proportional allocation. With a winner-take-all system, the popular vote totals enough would have made for a very lopsided delegate count. For reference, Barack Obama whupped John McCain by less than this margin in 2008, and that election is not remembered as a real nailbiter.

The 2008 primary is also a great contrast: less than 1% of the vote separated Obama and Clinton that year, a close race that barely resembled the pretty noncompetitive 2016 version.

Sanders held on after most candidates would have conceded, which made things look a bit more exciting. But there really wasn’t that much drama here. As FiveThirtyEight has explained over and over, 57% might just be what a blowout looks like with proportional delegate allocation.

Still, 43% is 43%. Do more than 4 in 10 democrats belong to Sanders’ progressive wing? That may be a blowout by candidate standards, but in ideological terms, that’s a significant “wing.” Right?

The problem with this line of thinking is that 43% of primary voters aren’t necessarily going to translate to 43% of Democrats. When we look at only primary voters, we look at only a portionof the liberal-leaning voters we’ll see side with the Dems in November. And while study results are mixed, the conventional political science wisdom says that primary voters are more extreme than their general election counterparts – meaning that the primary pool should have favored the more liberal Sanders.

Other things about the primary pool also favored Sanders. The Democratic primary still includes caucuses, where lower turnout favored Sanders’ preferred (white) demographics. And caucus-goers have been shown to be more extreme than primary voters.

There’s also a well-documented enthusiasm gap between Sanders supporters and Clinton supporters, which we could reasonably expect to help Sanders at the polls. If there’s a “silent majority” in play here, it’s the group of moderate Democrats who weren’t excited enough by Clinton to get out to their primaries.

Finally, and perhaps most importantly, we have to note that we’ve so far been talking about candidates and not ideology. Equating the progressive wing with Sanders is a mistake. Theoretically, all “true progressives” should have voted for Sanders – but it doesn’t work in reverse. Not all Sanders voters are true progressives.

Hillary Clinton is (infamously) the most disliked Democratic candidate in American history, and would have been the most disliked major party candidate in modern history if she had not had the good fortune of running against Donald Trump. She’s got a bad last name and an insider rep at a time when the entire country seems to be looking for outsiders. She is plagued by scandals. And she’s a woman, which likely has a negative impact on her chances, though it’s hard to isolate the impact of that with a figure as widely known and frequently criticized as Clinton.

In other words, plenty of people hate Hillary Clinton for plenty of reasons, and there’s some reason to believe that a chunk of Sanders’ voters were simply voting against Clinton, not for progressive causes.

Clinton has also swapped her position on some key progressive issues, which means that some “true progressives” would vote for Sanders over those issues, even though Sanders, Clinton, and the platform all agree. Voters like this wouldn’t register as more progressive than Clinton, though – this is more of a character issue.

All of this Clinton hate and distrust may help explain why, on the whole, Sanders’ voters weren’t much more liberal than Clinton’s. Of course, some Sanders voters were far more liberal than the average Clinton voter (these are presumably the voters who are switching to Jill Stein). But other primary voters voted more against Clinton than for Sanders, and against corruption or dishonesty more than for “true progressive” causes.

The progressive wing is smaller than we think

In sum, we have a primary pool that, demographically and ideologically, should favor a more liberal candidate; a climate that is, for whatever reason, poisonous to political insiders this year; and a very well-liked and relatively little-known figure running against the least popular Democratic candidate who ever lived. And yet Bernie still lost in what we might call a blowout fashion. So how big is the “progressive wing” of the Democratic party? It’s likely much smaller than the pool of Sanders voters, and there weren’t really all that many of those. It was a divisive primary, but not a very close one, and there’s more reason to believe that Democrats don’t all agree on Hillary Clinton than to assume that they don’t agree on her positions.