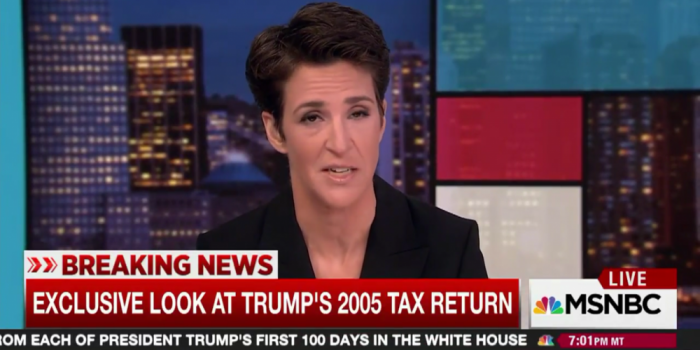 Here are twenty minutes of your life that you’re never getting back:

That’s Rachel Maddow, MSNBC’s MSNBC-iest host, overcooking a nothingburger for twenty goddamn minutes. Maddow made taxes seem even more boring than usual while hyping up two pages of President Donald Trump’s 2005 1040 tax form, and when all was said and done, things weren’t quite as horrifying as Trump’s critics have long hoped for.

The key figures: Trump paid $38 million in taxes on $150 million in taxable income. That’s a pretty far cry from the zero dollars that some had speculated. And the return is from twelve years ago – long before Trump was president, and even before he was a politician.

It’s worth remembering that Trump’s huge 1995 losses led to speculation that he may have avoided paying federal income taxes for nearly two decades. 2005 is, uh, only one decade after 1995.

Maddow’s Al Capone’s vault moment doesn’t mean it’s any less insane that Donald Trump still refuses to release his tax returns, and it still doesn’t mean that his full and more recent returns don’t show anything incriminating. But it does mean that you’re now slightly older and closer to death, and that MSNBC still sucks.