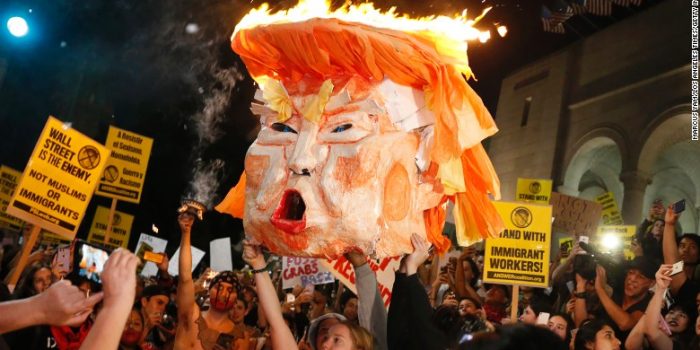 Donald Trump will be President of the United States, but more than half the country wishes he was not. In major cities across the country last night, angry protesters took to the streets to express their disapproval of the President-elect.

The protests were overwhelmingly peaceful, but there were incidents in some cities. In Oakland, two police officers were injured and two patrol cars were burned. Protesters threw rocks at police in riot gear, smashed windows, and started small fires downtown.

While largely peaceful, the protests were not always lawful. In Los Angeles, protesters vandalized city hall with anti-Trump graffiti. Protesters in several cities blocked or attempted to block major highways.

Protesters chanted anti-Trump slogans and held signs decrying the candidate’s positions on Muslim-Americans, black Americans, and the LGBTQ community. Trump was burned in effigy in Los Angeles, which is, uh, pretty unusual for an American President-elect. At least one protester burned an American flag, which is what people in politics call BAD OPTICS.

Protests on this scale after an American election are unprecedented, but Trump is an unprecedented candidate. His positions on racial and ethnic issues make him a uniquely divisive figure to many Americans. And, it’s worth remembering, he actually lost the popular vote on Tuesday. It’s going to be an interesting four years.