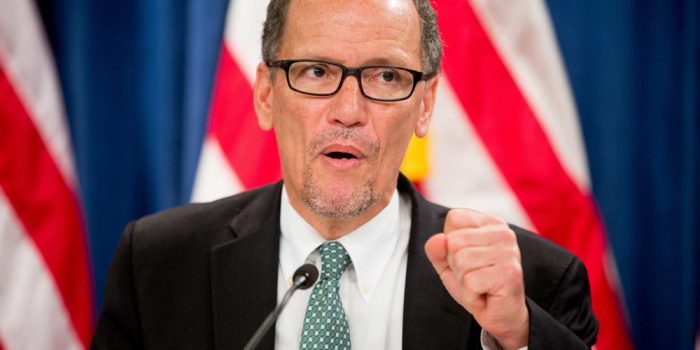 For months now, the populist far-left wing of the Democratic Party has seen Keith Ellison, a congressman from Minnesota, as their horse in the race for the DNC chairmanship. Ellison even earned the endorsement of the wing’s most popular figure: Bernie Sanders.

You will notice that the picture at the top of this article is not of Keith Ellison, and that’s because Bernie fuckin’ lost again.

The dude above is Tom Perez, who previously served as Labor Secretary under President Obama. He’s a mainstream pick that signals that the Democratic establishment is comfortable with the mainstream liberal politics that were popular during Obama’s presidency.

Berniecrats are frustrated – they’ve long maintained that the left’s refusal to embrace the socialist/far-left wing of the Democratic Party is the reason for the party’s big 2016 losses. (Did H.A. Goodman have a complete fucking meltdown? Yes, yes he did.)

Perez came up one vote short of clinching on the first ballot, then won it on the second. Perez asked Ellison to be deputy chair. Ellison accepted and took to Twitter to urge unity.