The Pew Research Center has released a new poll the reveals the public’s views on Trump’s transition efforts, and boy, people really do not like this guy. 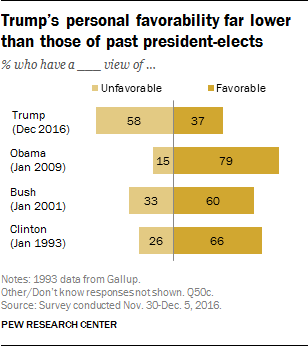 Holy shit! Trump is far more unpopular than our other recent Presidents-elect, and he dwarfs the unfavorable figures we saw with the other recent popular vote loser, George W. Bush, 58% to 33%. Bush’s favorables are far closer to the popular vote plurality winner (Clinton) than to Trumps. The only popular majority winner here (Obama) leads the pack, and Trump is the clear outlier here. The majority of Americans have an unfavorable view of Donald Trump.

Okay, now look at this: 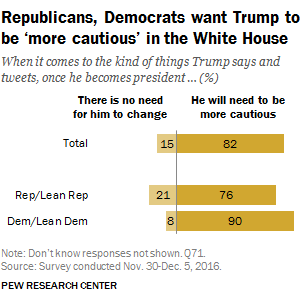 About three in four Republican-leaning respondents want Trump to chill the Hell out on Twitter! This is an amazing poll, and my personal favorite of the bunch.

Then there’s Trump’s policies and cabinet picks. People aren’t so into those, either:

Trump’s cabinet picks lag eighteen points behind George W. Bush’s. Eighteen points! It’s worth noting, though, that this is driven by historically high disapproval on the Democratic side. Here’s a closer look:

But still, we see here that George W. Bush – who, again, is the other recent president to take office without a popular vote victory – absolutely dunks all over Trump in terms of popularity. Check this out: 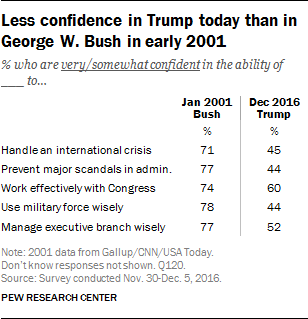 Bushie absolutely shreds the guy! George W. Bush inspired more confidence than Trump in his ability to “use military force wisely” to the tune of 78% to 44%. Holy shit! 78-44 looks like the score of a Duke tune-up game against West South Middle Kentucky State.

Are you ready for the best one? 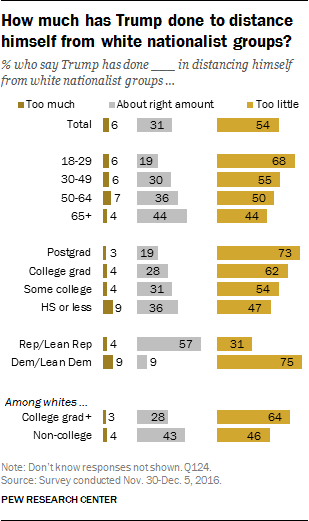 Nearly a third of respondents from the President-elect’s own party think he hasn’t done enough to distance himself from White Nationalists. Throw in the Democrats, and you have a nationwide majority who think Trump is too cozy with racists. Sad!

Don’t worry, though, it’ll all be fine: 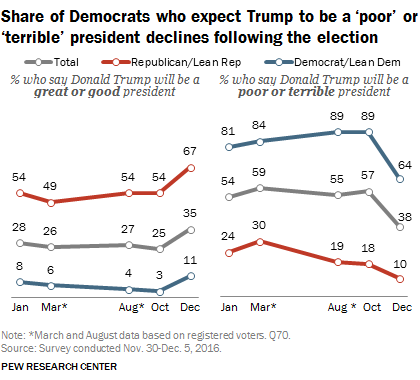 You can read the full Pew report – which also touches on race relations, the ACA, and other key issues – here.