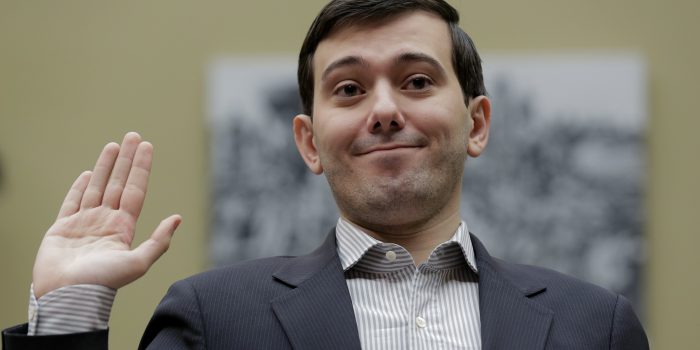 Noted Wu-Tang disrespecter Martin Shkreli has had his bond revoked by a federal judge. The reason: Martin decided to ask people to go steal him some of Hillary Clinton’s hair. Do not do this.

Hillary Clinton’s hair belongs on her head, not in the hands of our nation’s most notorious pharma bro – or in yours, so please do not try to acquire a sample of Hillary Clinton’s hair. And especially do not do so by telling the deranged and anonymous masses of the internet that you will pay them $5,000 to pull hair off of Hillary Clinton’s head during her book tour appearances and give them to you. That’s $5,000 per hair, which, frankly, is a pretty good deal, if you ask me.

Of course, the fact that Shkreli made it financially appealing to start tearing hair out of Hillary Clinton’s scalp is precisely the problem, and now he is going to jail.

Ol’ Martin’s lawyers tried valiantly to protect him from his stupidity, arguing that the stunt was a joke and that we were just seeing the WOMAN CARD here again: “If he had made the comments about another author who wasn’t Clinton,” one of the attorneys said, “I don’t think there would be a bail revocation hearing going on here.”

Would the justice system have gone easier on Shkreli if he’d encouraged random lunatics to yank out Jonathan Franzen’s hair instead? We will never know for sure. But regardless of the federal courts’ opinion of hair-stealing campaigns against literary or political figures other than Hillary Clinton, we can say with certainty what their position is on trying to goad idiots into pulling Hillary Clinton’s hair out, and that is this: it is not allowed. So, please, do not do it.