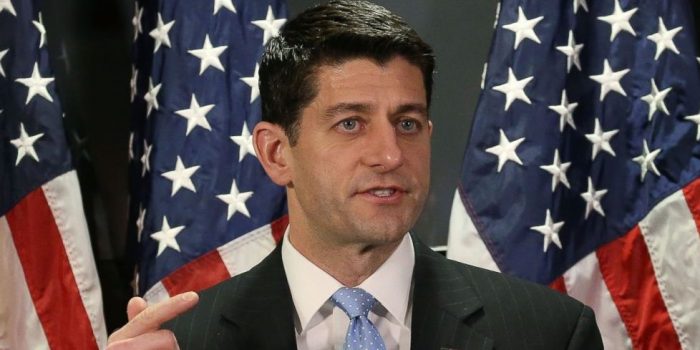 As The Who always said: meet the new bosses, who are largely the same as the old bosses, but with a few changes and also some people missing because of delayed votes.

Let’s check in on the Republicans first. How are they doing?

Awwww yeah, FREE HATS!!! That’s how you Make America Great Again. Those hats are the only entitlements the House Republicans plan to grant for the next four years.

Trump’s victory somehow Made Paul Ryan Great Again, because any fears that he’d face a tough re-election as House Majority Leader have evaporated. He was nominated unanimously by the Republicans, so he’ll be back for another session. Kevin McCarthy (R-CA) will stay on as House majority leader.

Meanwhile in the Senate, Republicans voted Mitch McConnell their majority leader again. What is dead may never die.

How about the Democrats? Well, they replaced departing Senate minority leader Harry Reid with a spry young 65-year-old from New York named Chuck Schumer. Schumer has been in the Senate since 1999 and has long been the presumptive replacement for Reid, so no surprises there.

Other more minor leadership positions were chosen as well. The big news for the Phish caucus is that Bernie Sanders (D-VT) was elevated to a leadership position for the first time. He’ll be the “Chair of Outreach,” which is a very special position that the Democrats invented this year, presumably so that they’d have something to give to Bernie Sanders. Sanders’ fellow progressive Elizabeth Warren was already in leadership, and she’ll be sticking around. The Dems clearly want to embrace their progressive wing, but they hedged their bets by rounding out their leadership with some more moderate liberals, like Joe Manchin III (D-WV), who will be on an advisory committee. Nothing reassures the establishment like a guy whose name ends in “III.”

But over in the House, oh boy. Nancy Pelosi has led the House Dems for 14 years now, and after the brutal 2016 election, some Democrats seem to be getting antsy. Pelosi will probably hang onto her position as House Minority Leader, but we’ll have to wait a couple of weeks to find out, because the Democrats delayed their vote. Pelosi is reportedly “furious” and “extremely defensive.” If she gets better at Twitter, maybe she can be president!