Welcome to Monday Memes, where we take a look at all of the best and worst memes that the internet had to offer in the past week. This week: Nazis.

A quick programming note before we dive into the memes: there will be no Monday Memes for the next two weeks, because I am on vacation, and I am the only one who works at this dumb site. Sorry. In fact, the whole site is taking a vacation. I’ll have a post up on this in a bit, but Indelegate will return STRONGER AND BETTER, with some new segments and better posts and maybe even some method of making me any money at all.

I actually prepped this post last week for my vacation, but I’m updating it a bit because, you know, Nazis marched in Virginia this weekend and killed someone. Jesus Christ. 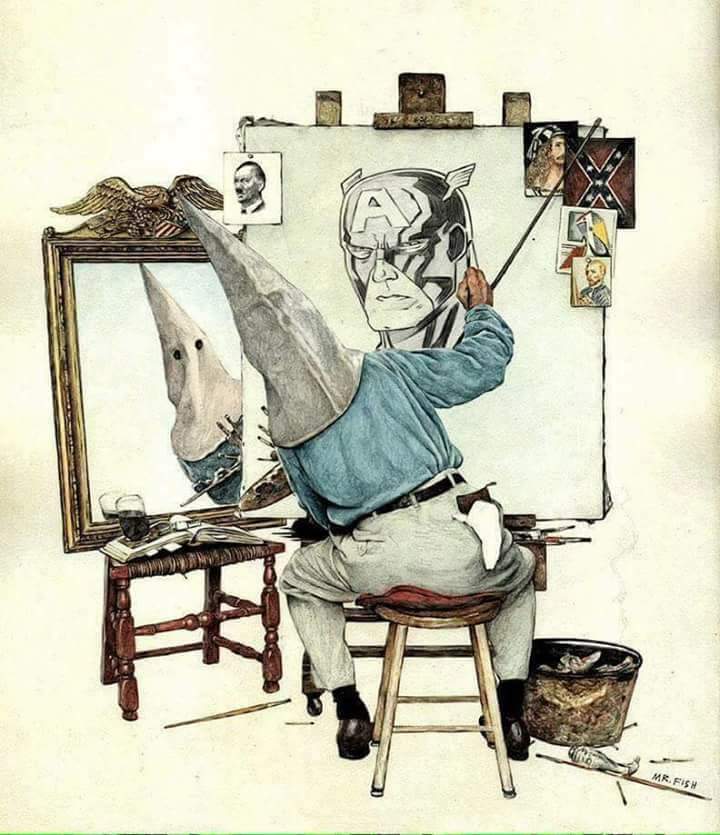 Meme grade: Indeed I tremble for my country when I reflect that God is just: that His justice cannot sleep forever.

It’s been a rough year, but this rally still stands out. It was a nakedly vile thing, a show of force for evil in public. We can argue about what constitutes a dog whistle or a microagression, and we can argue policy issues having to do with race. But when people march openly with Nazi flags, assault black people, and kill peaceful protesters with cars, there is no decent, moral person among us who is unable to condemn it.

If you were still wondering if the President is a decent, moral person, I regret to inform you that he is not.

Meme grade: Donald Trump’s political brand is inextricably intertwined with white nationalism, and it always will be. He is silent so that they can speak, and he knows exactly what he is doing.

For some much-needed contrast, enjoy this treasury of Republicans demanding a stronger response to what Marco Rubio, among others, called “a terror attack by white supremacists.” It’s an important reminder that while some of our leaders may not always see racism, few hesitate to condemn it when they do. Except for the President, who is a Nazi apologist.

Meme grade: I only sort of understand this one, but I love it anyway.

Anyway, aside from the Nazis, everything is going well!

No, just kidding, we are all close to death every day. 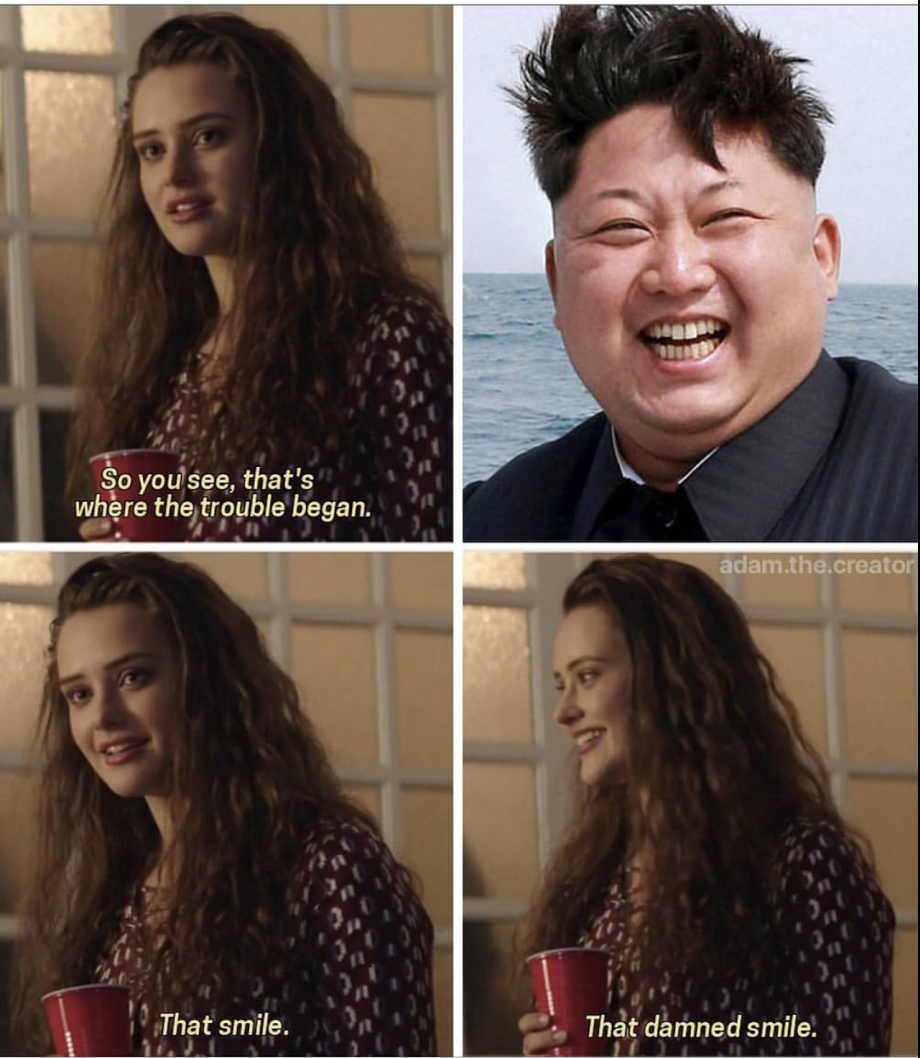 Meme grade: I’m going to be perfectly honest with you: I don’t know what show or movie this is from.

King Jong Un may be about to kill us all, but you had better believe that we’re not going down without making some memes of him first. 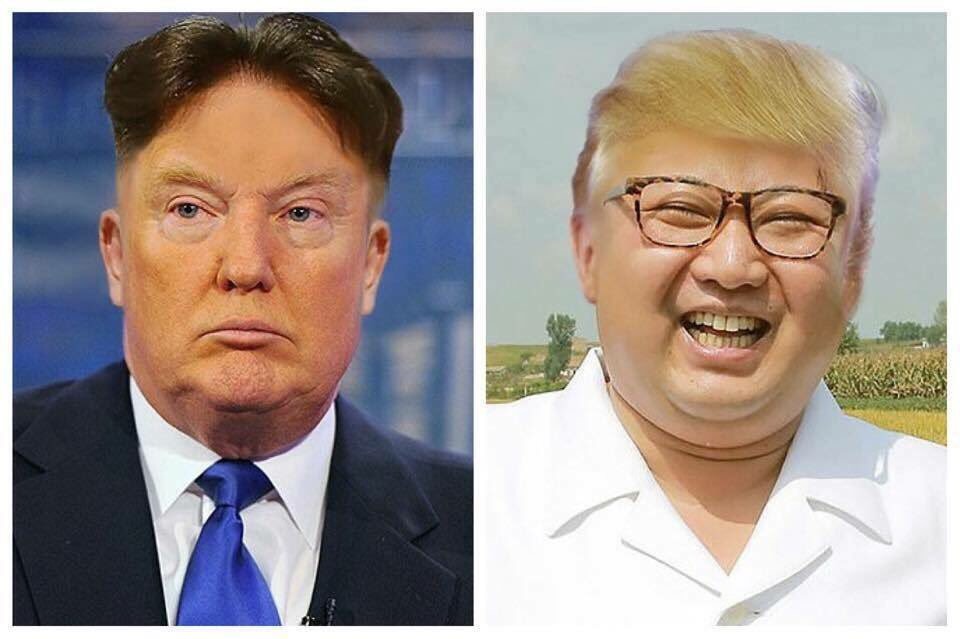 Meme grade: I ordered new glasses this week, and I think I may have accidentally bought the same frames as the world’s most unhinged dictator has. 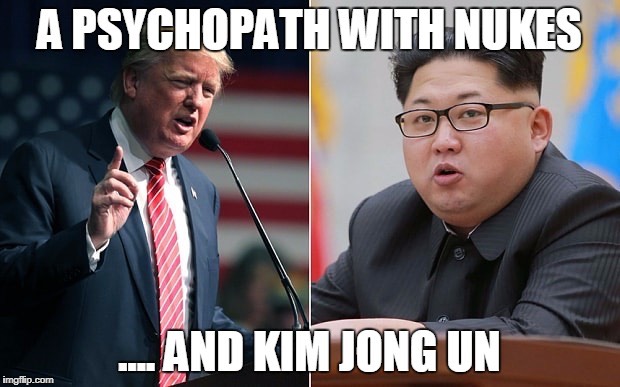 Meme grade: Come on. Trump is a narcissist, not a psychopath.

My friends, my friends, I will miss you all. How awful that it has come to this. If only we had listened. 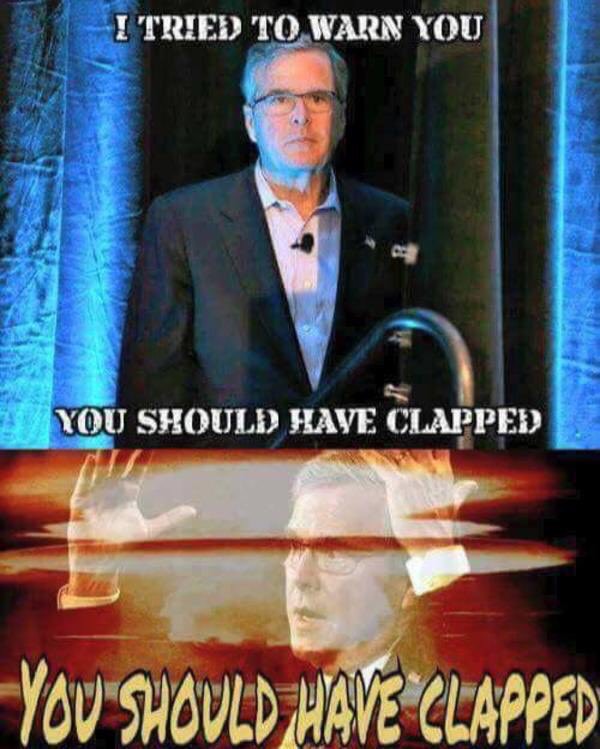 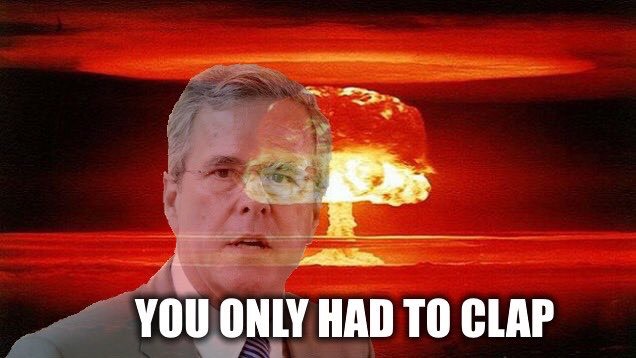 If we have gotten one good thing out the Trump era, it is the Jeb Bush memes. As a reminder, please send your Jeb Bush memes to indelegatesite@gmail.com. I am compiling a stash of Jeb Bush memes that, with any luck, will see us safely through to the end of Trump’s time in office. Thank you in advance for your help.

Let’s head over the Twitter, where this week a bunch of Alt-Right guys got triggered by a Vogue cover that had the Statue of Liberty on it. I’m not making this up. The Alt-Right was mad because liberal actress Jennifer Lawrence was depicted in front of the Statue of Liberty, which recently became the center of a mini-debate over its significance as a symbol of immigration when the White House’s Stephen Miller dismissed the famous Emma Lazarus poem inscribed at its base (“give me your tired, your poor,” etc., etc.) as having been “added later.” Well, would you look at Vogue just EXPLOITING the Statue of Liberty to OPPOSE IMMIGRATION REFORM? It’s enough to make you want to post “Sieg Heil!” online and get fired by CNN, imo. Wait, sorry, that’s a different story.

Meme grade: Wait, sorry, to get this one you need to know about the inflatable Trump chicken, too.

And here’s another! I guess Vogue cover Photoshops are… in vogue.

Okay but next month’s issue makes up for it pic.twitter.com/dfaStljhp6

It was a big week for the Alt-Right, which also got mad when Google fired a guy for writing a huge long memo about how diversity quotas are bad. Well, actually, they didn’t fire him for the diversity-quotas-are-bad take. They fired him for arguing that women are more prone to “hysteria” and are otherwise less equipped to do their jobs. Still, though, sounds like OPPRESSION to me! Let’s ask a racist conspiracy theorist if he agrees.

Meme grade: This meme is so beautifully bad. It is so thoroughly flawed in every direction that, in its symmetry of suckitude, it becomes perfect. I love it so much. A+.