Welcome to Monday Memes, where we take a look at all of the best and worst memes that the internet had to offer in the past week. This week: The French Disconnection.

Welcome back to Monday Memes, friends. Hope your weekend was swell! I guess we have to talk about covfefe, right?

Yep, the President made an oopsie while tweeting. You can guess how fired up the internet got about this, especially when the offending tweet stayed up for about five hours. Imagine! A typo, from the president!

A typo is no big deal, of course, but Trump saw another opportunity for self-sabotage and grabbed it by the you-know-what. He suggested covfefe was some kind of secret code:

Who can figure out the true meaning of “covfefe” ??? Enjoy!

Sean Spicer doubled down on the covfefe-as-code idea in that day’s press briefing, saying the President and a “select group” knew the meaning of covfefe. I have no idea why Trump chose to handle the situation this way. You are now caught up on the entire covfefe thing. Here are some dumb memes about covfefegate. 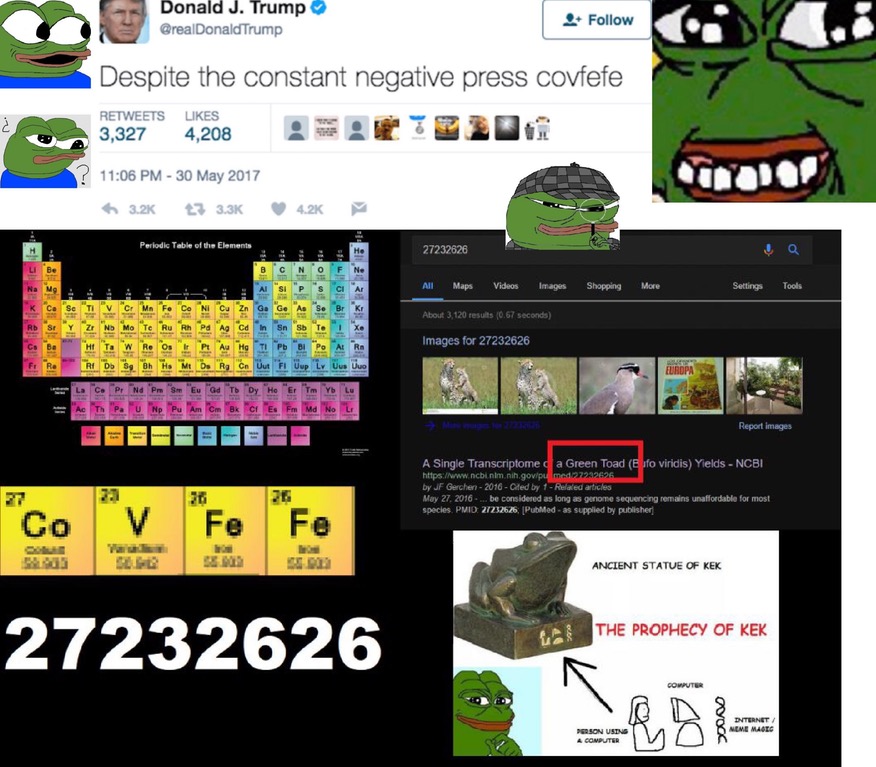 Meme grade: If you were wondering if a 4chan dude was going to spell covfefe with elements from the periodic table, combine the atomic numbers of those elements into one number string, Google that, find a reference to a “green toad,” and use all of this to connect Trump’s tweet to the late Pepe the Frog, the answer is yes. Full marks for this meme, which I love.

Liberal covfefe memes were pretty brutal. Check this out: 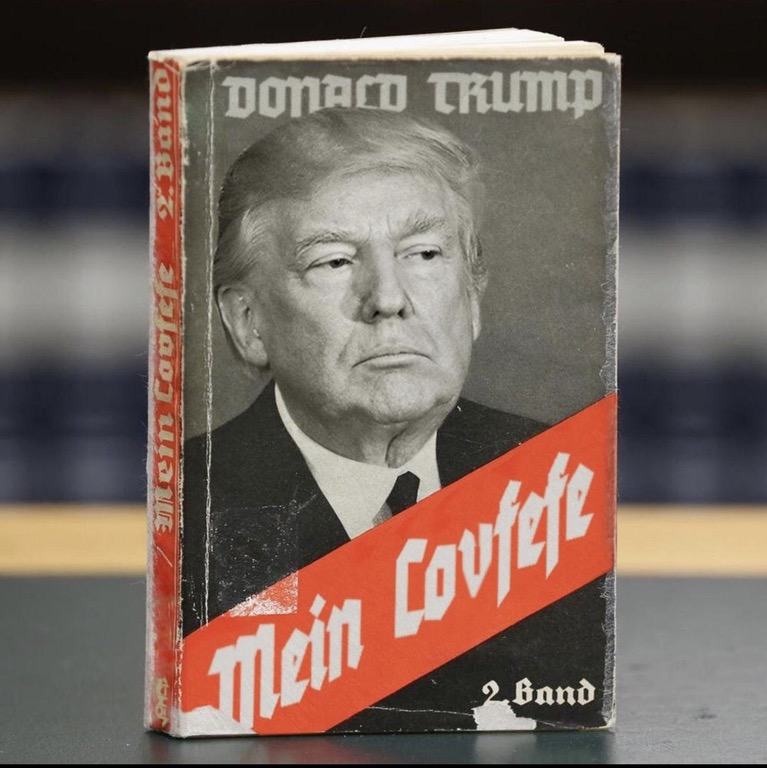 Book memes have been in lately, have you noticed that? 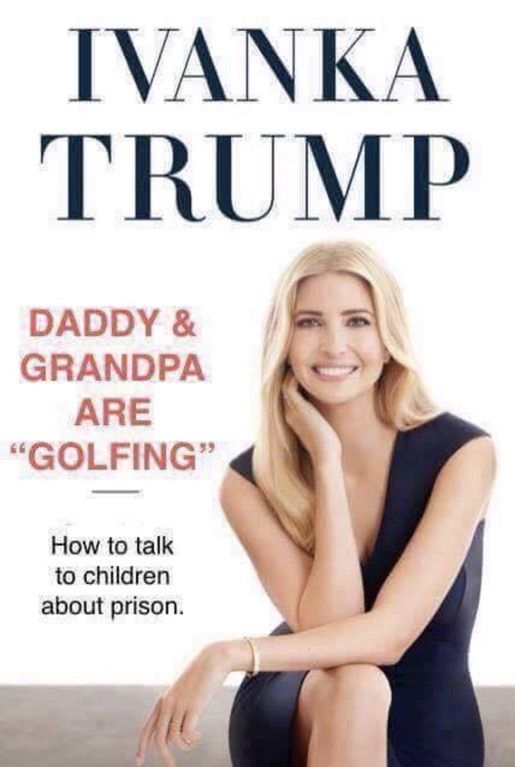 Meme grade: Not bad, but I would’ve liked to have seen more attention to detail in the font choices.

Yes, I’ve already steered us away from covfefe memes. Covfefe memes are bad. They are memes born of desperation. They are the result of many, many unfunny people trying to will a meme into being because it just seems like it should be a meme. But as we learned from garbage meme Ken Bone, memes are not made – they are born. Let’s move on.

Did you hear that you may not have to mute your TV on New Year’s Eve anymore? Kathy Griffin lit her career on fire this week, and it burned brighter than her star ever did. Her choice to do a photo shoot with a fake Donald Trump head apparently shook up young Barron Trump, which is normal, and made him think that his dad actually got decapitated by a bad comedian, which is… less normal. This has caused some people to call Barron Trump dumb, which seems a little unfair. Maybe it Donald Trump lived in the same house as Barron or, you know, saw him occasionally, then Barron wouldn’t mistake super-fake plastic masks for his own father’s head. At any rate, in a world full of BARRON BULLIES, r/the_Donald is here to stand up for what’s right. 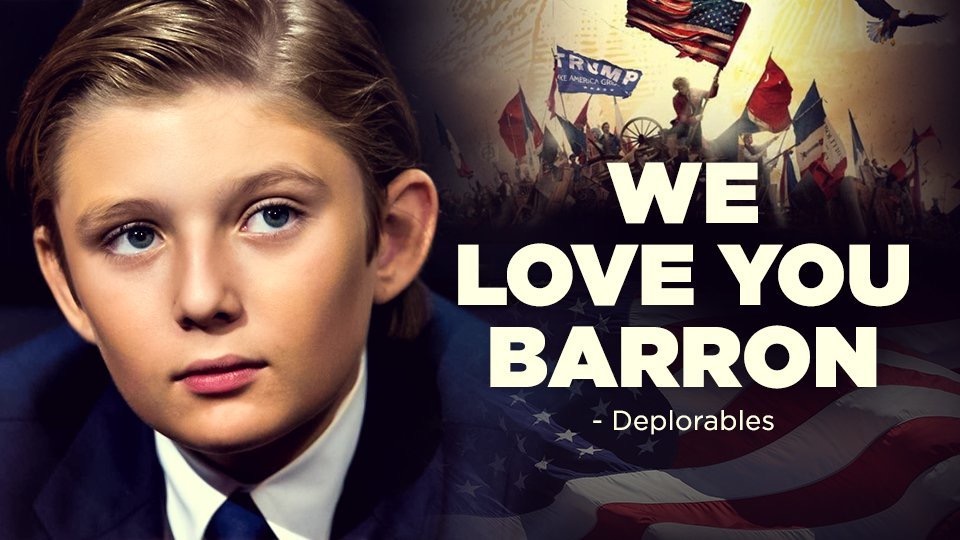 Trump pulled the U.S. out of the Paris Agreement this week, prompting this climate change-Kathy Griffin crossover meme: 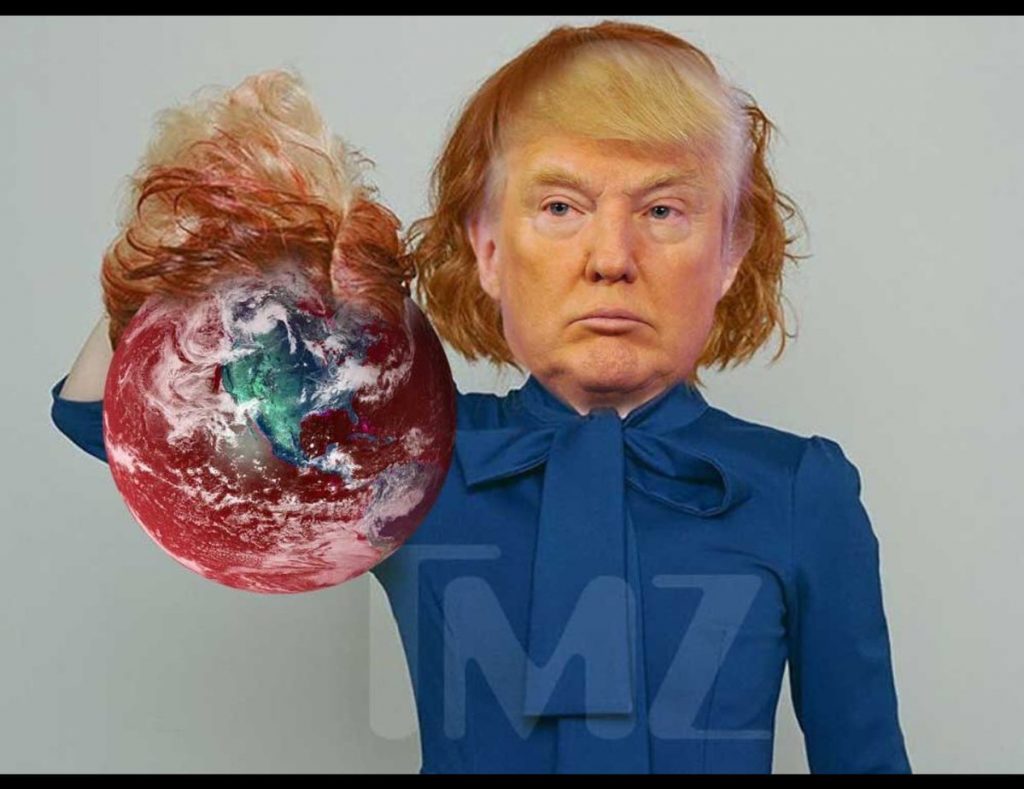 Meme grade: Listen, I have issues with this meme. That’s the whole Earth, there. It’s not decapitated! There’s no Earth-body to decapitate it from. You can’t decapitate the Earth. Can’t be done. That’s just science. And is it bleeding? I really don’t know – the seas are red, but it’s not dripping or anything, and the clouds are still covering the red parts normally. And why does the Earth have hair? This meme makes no goddamn sense. Get it out of here. F. 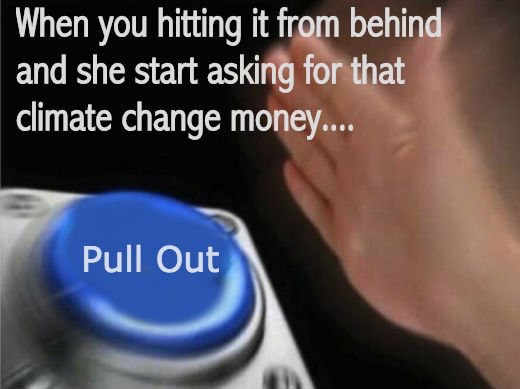 Meme grade: I can’t decide if I like the way this meme inverts the whole point of the “nut button” meme format. Let me get back to you. 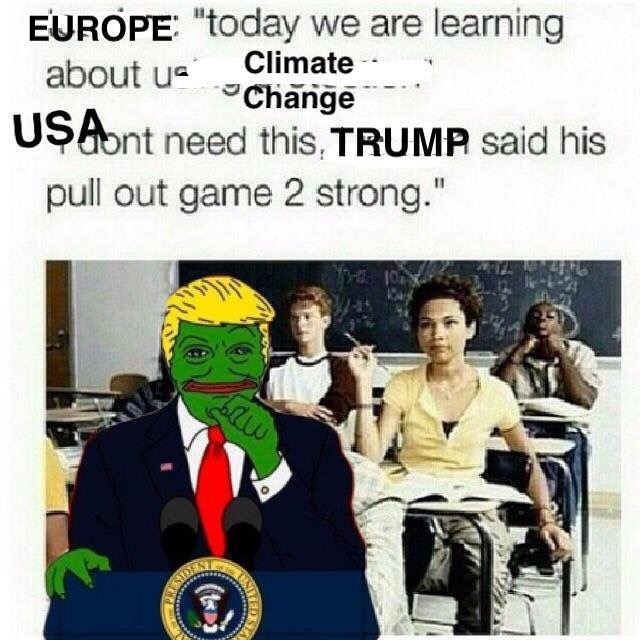 Meme grade: Though it has a high barrier to entry, this Daquan take-off is a true memer’s meme.

But most people aren’t happy about this Paris thing – only about a third of Americans wanted out of the agreement, and political support for the move has been pretty non-existent outside of coal country. Many Americans are outraged. Of those, a decent plurality seem to be making Captain Planet memes. 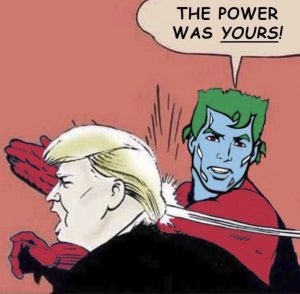 Meme grade: Solid meme on its own. But bring another Captain Planet meme into the mix, and you’ll find that with THEIR POWERS COMBINED… 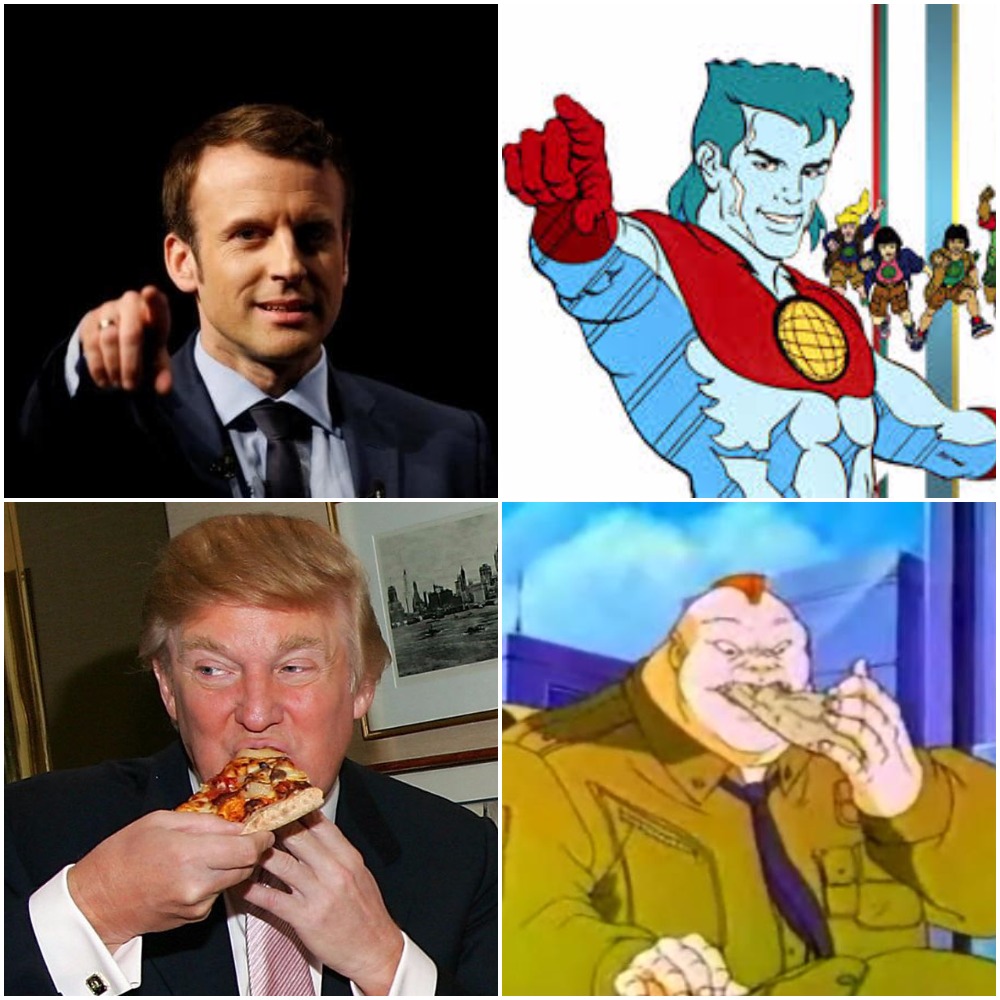 Meme grade: …they become the MEME OF THE WEEK!

Remember that meme that matched election years to Star Wars movies? Well, check out this version: 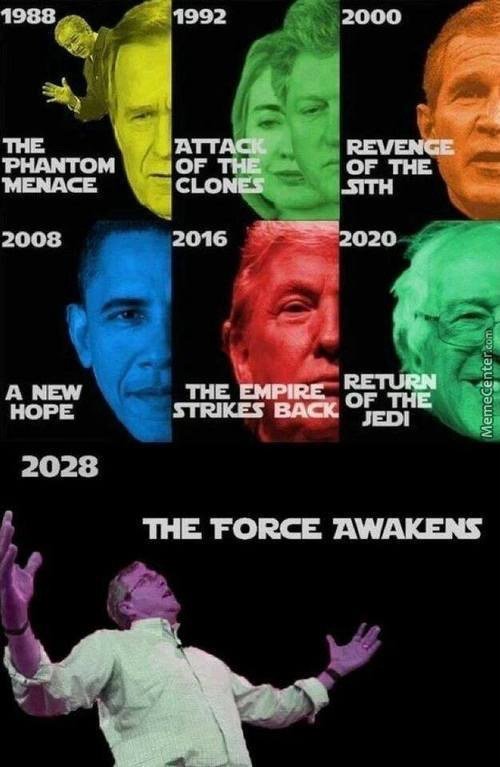 Meme grade: It’s impossible to overstate how much Jeb’s presence improves this meme. A+++++ 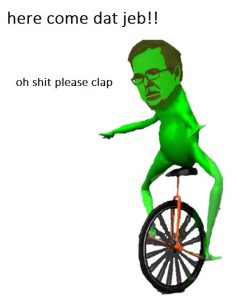