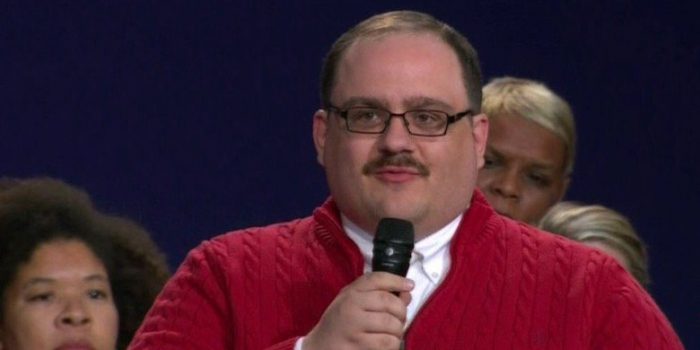 Today, we witnessed the character assassination of one Ken Bone. Ol’ Ken has enjoyed a meteoric rise to undeserved stardom over the past few days, but what the internet giveth, the internet taketh away, and now the whole world knows that Ken Bone is a pervy racist shithead.

We’ve managed to go nearly five full days without mentioning Ken Bone on this juvenile politics blog, which I consider a monumental achievement. To be honest, though, there was never much to write about him. My friends, this may hurt to hear, but you deserve to know the truth: Ken Bone was always a garbage meme.

The second presidential debate was lame as hell. You know it, I know it, everyone knows it – SAD. Donald Trump was terrible, but he didn’t self-destruct at nearly the glorious pace we’ve become accustomed to. Hillary Clinton was bad, but not nearly bad enough to be entertaining. The moderators were bad, but not funny-bad, and they were only mean to Donnie, so nobody cared. The audience was bad. I was bad. You were bad. Everything was bad for 90 minutes, but we watched anyway. It wasn’t nearly as good as the first debate, and probably won’t be as good as the last one. It was the Temple of Doom of debates.

There’s no shame in wanting a meme out of this. We deserved a meme. A bored nation raked its eyes across the screen, searching for an answer. Somehow we skipped right over looming Donald (decent meme!) and giant chin guy (America prefers its fat-shaming to be more subtle and red-sweatered). We settled on Ken Bone, who was not funny, and is a garbage meme.

Have you ever read this piece that Bill Simmons wrote back when he was still good and you hadn’t switched to Drew Magary yet? Simmons makes the case that Ryan Reynolds is not a movie star and argues that Hollywood needs a certain number of leading men at all times, whether or not the talent is there. It’s just like NFL quarterbacks, Simmons writes – there are a certain number of jobs, and you have to fill them. What I’m getting at here is that the same goes for memes. Ken Bone is the Blaine Gabbert of memes: he was there because we needed a warm body, now he’s gone, and he probably isn’t thrilled with Colin Kaepernick.

Ken Bone just didn’t cut it, folks. He was memeing at below replacement level from the start. He had a moderately funny look, and that was it. I struggle to make the case against him because there is really no case for him: he just stood there and asked a weak question and looked dad-like for a few seconds, and a hungry and desperate nation latched on. He did not “win the debate.” He was not a symbol of “normal” America, except maybe in terms of BMI. Normal America was on stage, with the entrenched opinions and low levels of discourse. The sooner you accept that, the better.

Note: if you put down “media fuckery” as a write-in candidate, those votes count for Trump.

We strive for objectivity on this blog (rude, snarky objectivity!), but it has to be said: Ken Bone is an undecided voter in a Trump-Clinton election. Is it really shocking that he has a callously neutral Trayvon Martin take, or that he isn’t exactly a feminist? Mr. Bone here isn’t a Reagan Republican struggling with a tough choice between a liberal and alt-righter (besides, all of those people have already decided to protest-vote for Gary Johnson and then self-immolate at the National Mall). He’s a friendly-looking chubby dude who doesn’t really care about race or gender issues, and he wants to know what the bottom line is for energy workers. That’s either fine with you or it’s not, but it’s wishful thinking to assume that anyone in that debate audience (all undecided voters) felt very strongly about Trayvon Martin – if they did, they wouldn’t be swing voters in this particular election.

So here we are now, feigning outrage, trying to return red sweaters to Kohl’s before Halloween. But is any of this really garbage meme Ken Bone’s own fault? I SAY NO. We have only ourselves to blame. We are, as a nation, too hungry for memes. These are trying times, but we need to guard our hearts. Ken Bone was always a garbage meme. Let the right memes in, people.