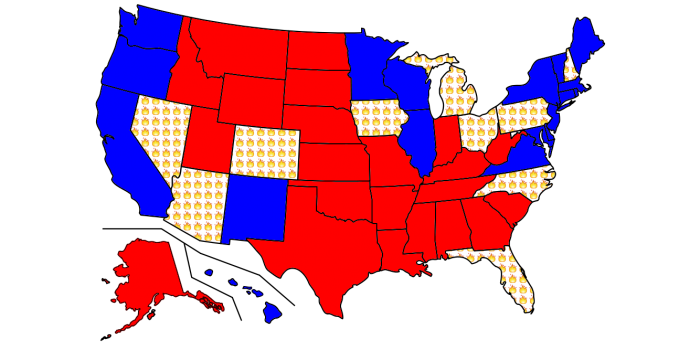 Here’s some information, but with jokes! This is our complete guide to the 2016 election, including information on the presidential election, Senate races, House races, and more. Let’s get started.

Who is going to win the presidential election?

Going into the election, Hillary has a sizeable lead. But Donald Trump does have a clear – if difficult – path to victory. Let’s start with a map that locks in the states that most leading projections agree on: Click the map to create your own at 270toWin.com

You can haggle about this, obviously, but these states are filled in because they have something north of an 8-in-10 shot to go that way. Remember, you need 270 electoral votes to win the presidency.

Here’s a link to that starting map above. Check it out and give Clinton Florida and its 29 electoral votes. Clinton moves within a managable 17 electoral votes of the presidency, with easier states than Florida left ahead of her.

Simply put, if they call Florida for Clinton, you can go to bed. Florida and the safe states are enough for Clinton, and on top of that, a win in Florida would mean that the underlying factors (turnout, demographics, etc.) favor her, making her more likely to win elsewhere. Realistically, though, expect Florida to spend most of the night in the “too close to call” column. Of all 50 states, this race will probably be the closest in Florida.

If Trump wins Florida, though, this gets a lot more interesting. Let’s continue down through the rest of the swing states in descending order of importance.

After Florida, Pennsylvania is the next-biggest swing state. It’s worth 20 electoral votes – and it’s leaning significantly towards Clinton. It’s far from out of reach, and it’s probably must-win state for Trump. If Trump can win Florida and Pennsylvania, the rest of his path is really pretty easy to find. You no longer need to have him pulling upsets in places like Michigan, for instance. But the problem for Trump is that winning Pennsylvania would itself be an upset, albeit not a particularly insane one.

Since Trump needs to take swing states (like Pennsylvania or Michigan) out of Hillary’s column, it goes without saying that he has to win the swing states that he’s leading in now. Based on that, you can argue that super-tight North Carolina is more important than Ohio – and hey, maybe you’re right, I don’t know. But if Trump loses Ohio, stick a fork in him.

Okay, let’s say we give Trump all of the above (Florida, Pennsylvania, and Ohio). Let’s give him Arizona and Iowa, because he’s favored in both of those. And let’s give Clinton Nevada, because her early voting lead there is looking pretty impressive.

You’re left with two important states: North Carolina and Michigan. Give either to Trump (on top, of course, of all those other states we just handed him), and he’s your winner. Of the two, he’s closer in North Carolina. Trump needs some big wins to Make North Carolina Relevant Again, but it could happen.

Of course, it’s not a given that Clinton can hold onto Nevada if we’re experiencing the kind of Trump surge that this situation describes – we’re getting a little deep into hyptheticals, here. Maybe Nevada swings Trump at this point, or perhaps even Michigan does – Trump made a last-minute push there, and it will help him get over the top if he can hold onto Ohio, win Florida, and upset Clinton in Pennsylvania.

What is going on with Utah?

The anti-Trump side of the Republican party has calmed down a bit, and while they could still cost him dearly if their dissatisfaction results in low turnout, the supposed third-party exodus never materialized.

Except in Utah! Third-party conservative Evan McMullin has a small but real chance of taking the state, and that is just wild. McMullin’s chances peaked a little while ago, but FiveThirtyEight still gives him a better than 1-in-10 chance of carrying the state. That’s not nothing (well, it’s close to nothing, but a political junkie can dream), so keep an eye on Utah and maybe you’ll see some weird history. Probably not. But maybe!

The bottom line: Clinton is favored, but Trump can win

So there you have it: Clinton has the inside track, but Trump does have a path to victory. If Trump loses Florida (a toss-up), it’s over. If he loses Ohio (where he leads), it’s over. If he wins those and wins some combination of major remaining swing states (Pennsylvania and North Carolina are the big ones, but don’t ignore Nevada and Michigan), he’s going to be the president.

Who will control the Senate?

We did a whole article on close 2016 Senate races, but here’s the big picture. Blue is Democrat, red is Republican, and the competitive states are represented, as they traditionally are, by fire emojis. 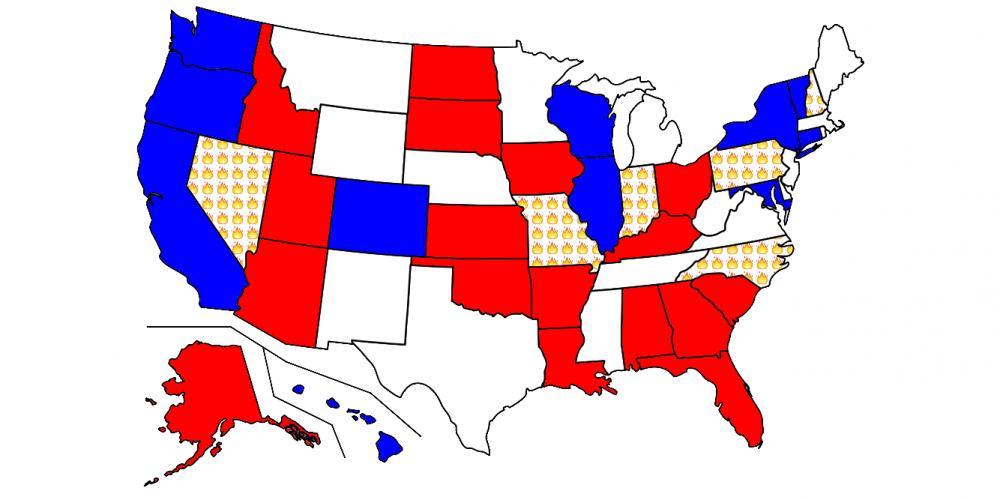 The thing to know about the Senate is that while the Republicans have the majority, most of the seats up for election this year are Republican – including five of the six competitive races. Add up all of those at-risk seats, and there’s a real chance that the Democrats snag the Senate majority tonight. Odds of that have slipped down to a dead heat, so the Senate races are going to be extremely fun tonight.

In case you’re too lazy to click a link, here are the closest Senate races:

Nevada, New Hampshire, North Carolina, and Pennsylvania are all also presidential swing states, so there’s tons of fun to be had here.

Sorry, I don’t know why I thought that would be funny.

Representatives serve two-year terms, which means that all 435 of ‘em are up for re-election every mid-term or presidential election. I’m not about to run through 435 elections, especially because nobody’s out doing polling for half of them and a ton are in safe districts. The bottom line here is whether or not the Republicans will hold onto their majority.

Let’s save some time and just say this: the Republicans are going to lose seats but retain their majority.

The short story is that Republican incumbents are vulnerable this year thanks to the unpopularity of Donald Trump. Particularly hard-hit are moderate conservatives in blue states, which is why most projections show Democrats stealing seats in places like California, Nevada, New York, and Virginia (or some combination thereof).

We only really care about who has the majority (Republicans – they’re gonna keep it) and the fates of the House Majority Leader (Paul Ryan – he’s gonna win) and Minority Leader (Nancy Pelosi – also very much gonna win). Boring! Let’s move on.

One last thing to watch: governors’ races. This is another one that we dedicated a whole separate article to (check out our guide to 2016’s close governors’ races here), but let’s take another look at the map and list out the good ones for the lazy: 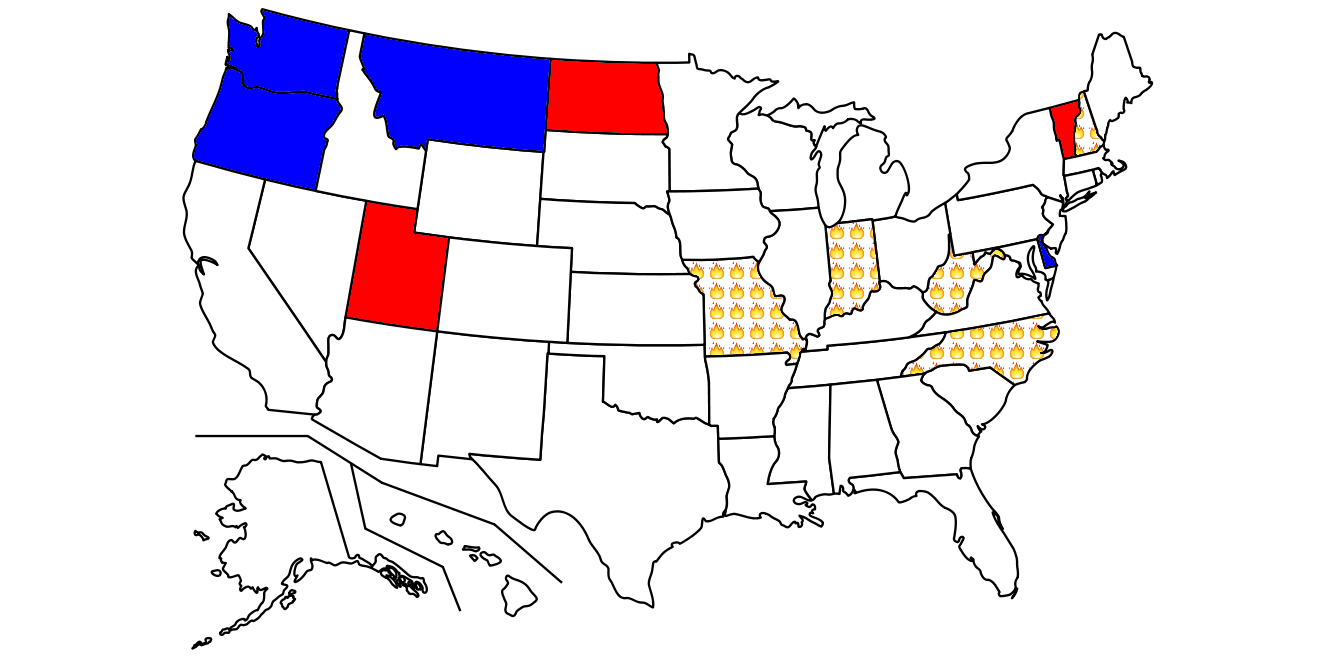 There’s some cool stuff to watch here. In Indiana, we’re looking at the race to replace Republican vice presidential nominee Mike Pence, who skipped out on a tough reelection battle when he joined Trump’s ticket. In Missouri and West Virginia, Democrats have chances to take office in very red states (some of the non-competitive races have this fun element, too – look at Vermont and Montana up there on the map). In North Carolina, McCrory’s battle can be seen as a referendum on the notorious “bathroom bill,” HB2, which has drawn sharp criticism from LGBTQ advocates. Finally, the New Hampshire contest features really great names.

Maybe You Should Not Be So Mad at Children