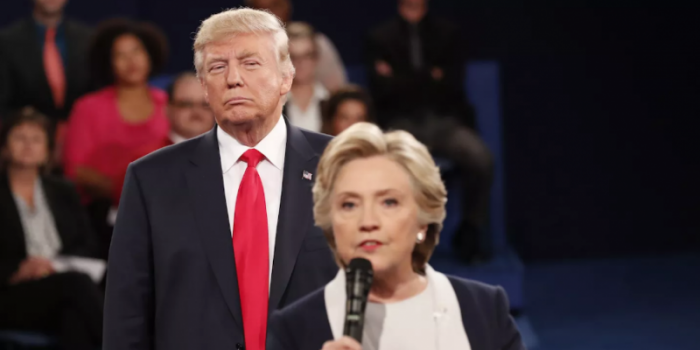 The second presidential debate was last night. What was that all about?

Who won the debate?

Hillary Clinton took her second straight debate win, but this one was far less decisive than round one. Donald Trump did his level best to self-destruct on the goddamn stage, but Clinton and the moderators both had a weak night.

Clinton usually does well in town hall-style debates, but this time around she stumbled. She seemed to lack some confidence and to let Trump get under her skin. Her contentious style helped today’s narrative morph from “Trump meltdown” to “nasty debate.”

The moderators had a very rough night. In an attempt to control Donald Trump’s interruptions and evasions, they went after him hard – even going so far as to cut him off mid-answer during a rebuttal for veering into an unrelated attack (hardly a new tactic for a debate). At one point, moderator Martha Raddatz inexplicably started debating Trump herself (interjections around 50 seconds in):

But, as usual, nobody could beat Trump in a meltdown contest. Even in the video above, Raddatz’s arguments aren’t the highlight – instead it’s Trump’s “how stupid is our country” quote. Trump was pretty unhinged in this debate, and at one point even threatened to throw Hillary in jail if elected. There’s no getting around the fact that he lost this debate.

Ultimately, though, this wasn’t the worst thing for Trump. The news cycle won’t be kind to him, but the headlines won’t all be about him: between the aggressive moderation and Clinton’s lackluster performance, there is plenty else to discuss. And moderately negative headlines would actually be a step up for Trump after his breathtakingly bad week. Trump lost the debate, but not that badly – this shouldn’t spur any more Republican defections, for instance. That’s an insanely low bar, but it’s an important one for Trump in a very dark time.

Trump reiterated that his 2005 comments were “locker room talk,” and that he was not bragging about sexual assault. He also said he had never groped or kissed a woman without consent.

Clinton, for her part, used the opportunity to question Trump’s fitness to serve and tried to fit the tape into a larger pattern of misogynist behavior she says Trump has exhibited.

Prior to the debate, Trump held a surprise press conference featuring four women: three who have accused President Clinton of sexual assault and one who was assaulted by a man Hillary Clinton represented while working for a legal aid organization in Arkansas. In the debate, Trump pointed out his four guests and claimed that there has “never been anybody in the history of politics in this nation that’s been so abusive to women” as Bill Clinton. Hillary “attacked those same women,” Trumps said.

Clinton quoted Michelle Obama (“when they go low, we go high”) and refused to directly respond to the accusation.

Trump once again defended his role in the birther movement by accusing Clinton of beginning the rumor during her primary run in 2008 (this is not true – while the idea began during that race, it’s never been tied to Clinton’s campaign organization).

When asked about her email scandal, Clinton admitted to a mistake but argued that many misunderstood the nature of the issue. No classified material ended up in the “wrong hands,” Clinton said, though there’s no way to know if that is true.

In perhaps the most remarkable part of the debate, Trump threatened Clinton with legal action: “I didn’t think I’d say this,” he said, before stating that, if he won, he would appoint a special prosecutor to investigate Hillary Clinton’s email scandal (Clinton has already been investigated and was not charged).

Trump was even more direct when Clinton commented that it was “awful good” that someone with his temperament is not in charge of U.S. law. “Because you’d be in jail,” Trump quipped.

Shortly after the question related to the emails, Trump demanded that the moderators explain why they had not brought up the emails, seemingly unaware that they just had.

Clinton defended the ACA and attempted to clarify her husband’s aggressive criticism of it. She pledged to build on the law and bring costs down while preserving the “good things” about it.

Trump pledge to repeal the ACA, calling it “fraud.” “Obamacare will never work. It’s very bad, very bad health insurance,” Trump said, calling Obamacare “expensive for the people who have it” (despite the implication here, the ACA is not itself a health insurance plan). Trump also pledged to allow more competition by erasing state boundaries in regard to health insurance.

In response to a question about Islamophobia, Trump said that Muslims are uniquely responsible for reporting “hate” when they see it in their community. He emphasized the term “radical Islamic terror,” which Clinton and President Obama avoid using due to the religious language.

Trump backed off of his Muslim ban, saying it has “morphed” into “extreme vetting” rather than an outright religious ban. Trump also praised the deceased Captain Khan, whose parents he had previously insulted. Trump claimed that Khan “would have been alive today” had Trump been in office when the decision was made to invade Iraq (Trump claims he would not have done so).

Clinton defended her position on the crisis, which calls for an increase in the number of refugees the United States accepts from the region. She took the opportunity to focus on Russia, which backs Syrian President Bashar al-Assad.

Trump (as mentioned above) backed off of his Muslim ban. He had surprisingly conciliatory words for President Assad, who Trump suggests is useful for his anti-ISIS position.

In a later question on the military conflict, Clinton again underscored the nature of Russia’s involvement (pro-Assad, anti-rebel; the U.S. is pro-rebel). Trump knocked Clinton for Obama’s “line in the sand.” She responded that she was not Secretary of State at the time, the implication of which is untrue (she was there when the position was stated, but not when Syria crossed the so-called “line”).

Trump admitted that he and running mate Mike Pence had not discussed a comment Pence made about bringing U.S. military power into Syria more directly. Trump said he disagreed with his running mate’s position.

In the question of the night, the candidates were asked if it was alright to be “two-faced” (it’s not). Clinton went off on a tangent about Russia, and Trump responded by trying to distance himself from Putin and Russia, saying he didn’t know anything about the country’s inner workings.

Facing a direct question about her leaked comment that politicians must have both a “public and private position” on each issue, Clinton claimed to be talking about the movie Lincoln (however, the leaked email in question shows pretty clearly that her speech was using that movie as an example to illustrate the point, rather than as the main subject). Trump landed a zinger: “Honest Abe never lied – that’s the big difference between Abraham Lincoln and you.”

Taxes on the wealthy

Trump accused Clinton of wanting to raise taxes on everybody; Clinton contradicted that, saying no families making less than $200,000/year would see their tax burden increase. Clinton accused Trump of protecting the wealthy: “Donald always takes care of Donald and people like Donald.” Trump argued his policies would lead to more economic growth.

Trump conceded that he did indeed use the tax loophole that The New York Times says could have protected him from 18 years’ worth of federal taxes. “I understand the tax code better than anyone who’s ever run for president,” Trump bragged.

On the subject of Supreme Court appointees, Trump promised to appoint a conservative judge along the lines of Justice Scalia. Clinton clarified her position on gun control, saying she “respects” the Second Amendment but calling for a range of new controls, including the closing of the so-called “gun show loophole.”

Trump promised to “bring our energy companies back… they’ll pay off our national debt.” Clinton repeated her calls for the U.S. to become ““the 21st century clean energy superpower” while insisting she would not “leave anybody behind.”