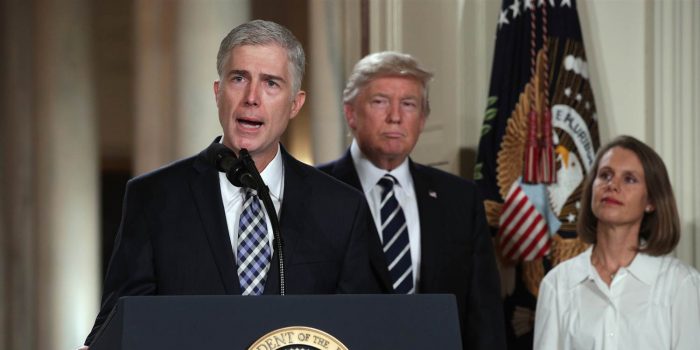 Donald Trump has announced his pick for the U.S. Supreme Court: Neil Gorsuch. Who the hell is Neil Gorsuch?

Gorsuch is a 49-year-old conservative judge who currently serves on a federal appeals court in Denver. He once clerked for Justice Kennedy, and he may now serve alongside his old boss on the Supreme Court – a historic first for you trivia buffs.

He also clerked for Supreme Court Justice Byron White and for Judge David Sentelle of the Washington, D.C. federal appeals court. He went to Columbia undergrad, to Harvard for his law degree, and then – presumably just to show off – to Oxford for a PhD. So it looks like President Trump has submitted an honest-to-God qualified candidate for the job, a sharp break from his usual policy of nominating bad dancers and people who consider grizzly attacks a major education issue.

He’s a pretty mainstream conservative pick and checks all the boxes: conservative values, strict interpretation of the Constitution, probably gonna wanna overturn Roe v. Wade, etc., etc. In short, Gorsuch is the judge mainstream Republicans prayed for when they held their nose and voted for Donald Trump for president.

In fact, Gorsuch is a lot like the justice who he’d be replacing: Antonin Scalia. SCOTUSblog has a bit more about this in their excellent live blog (which is no longer live, but is still a blog) and potential nominee profile, but the similarities include a penchant for strict interpretations, a soft spot for religious expression in public spaces, and a distrust of legislative history (the drafts and history of a bill in Congress, which can be used to interpret its intent in court).

He’s also by all accounts a swell dude with a reputation for being approachable and reasonable. Expect him to be confirmed.

Be the first to comment on "Who the Hell is Neil Gorsuch?"