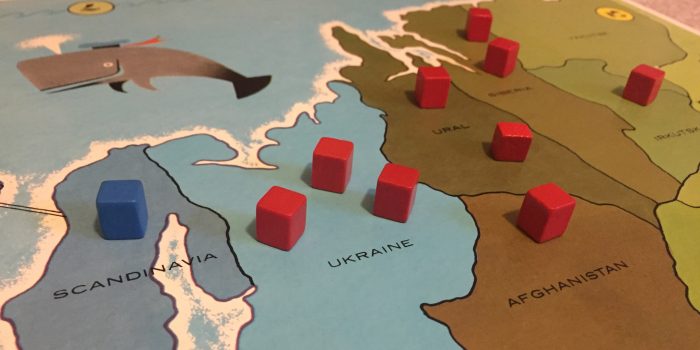 The other day, Donald Trump called NATO – arguably the most successful military alliance in history – “obsolete.” A gleeful Putin seconded that assessment shortly afterward, because (obviously) getting rid of NATO would be good for Russia and bad for the United States and Western Europe. This is a pretty clear-cut thing, and it makes me think that Donald Trump is probably bad at Risk.

From the evidence we have, I think it’s reasonable to assume that Donald Trump would be very bad at managing alliances in the classic game of global domination. He probably listens a little too much to the one guy who insists that other guy is the “real threat.” He makes deal and then “forgets,” but he can’t take it back because he “already rolled.”

I think that, most likely, Donald Trump lets other players claim entire continents in the game opening (you’re picking countries, of course, because Donald Trump hates the card-drawing version of the game set-up). He would probably not get one himself.

Donald Trump would start from Australia in a three-person game. He thinks North America is “overrated.” He lets other players hold Asia when he’s the only one left that can stop them.

Donald Trump almost certainly forgets to place his troops at the beginning of his turn and then asks to do so later – not at the end of his turn, which would be annoying but probably okay in a casual game, but during your turn, when you’re trying to attack him. He presumably gets mad when you do not let him do this.

When Donald Trump’s die rolls onto the floor, he checks the number before deciding whether or not it should count.

Donald Trump attacks with one troop even though he has four on the relevant country because he “doesn’t want to risk the extra troops.” If he loses, he will attack again with one troop. I think it’s pretty clear that Donald Trump probably plays this way.

Donald Trump knows that “withdrawing” or “retreating” is not allowed in the official rules, but he insists that you should play that way as “house rules,” even though he is at your house.

Donald Trump declines to attack in several of his early turns and, consequently, does not have enough cards for the end game.

It seems clear to me that Donald Trump tends to stop just short of finishing off another player, not realizing that he can take their cards and turn them in mid-turn as per the official rules.

I’m thinking that Donald Trump owns one of those branded spin-off Risks with a different board. He wants to play that version. He’s okay with playing on your classic board, he says, though you can tell he doesn’t mean it. The Battlestar Galactica board is a little more complicated, Donald Trump explains, and it’s not for everyone. But Donald Trump will lose no matter what board you play on.

Donald Trump asks out loud what it means when the card has the cannon but also the horse and the guy.

Whenever declaring an attack, I bet, Donald Trump incorrectly pronounces the name of the country he’s attacking. He does not state where he is attacking from at all.

Donald Trump, it’s fairly clear, would be bad at Risk.

Be the first to comment on "Donald Trump is Bad at Risk, I’m Thinking"