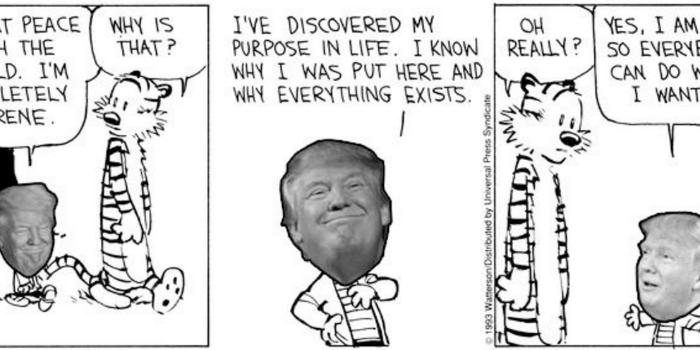 It’s been a rough election cycle for our country, but the State of the Memes has never been stronger. And there is perhaps no greater 2016 election meme than Donald and Hobbes.

The premise of Donald and Hobbes is to take panels from Calvin in Hobbes, which is Your Favorite Comic Strip Though the Far Side Is a Close Second, and to stick Donald Trump’s head over Calvin’s. Some of the content creators replace other characters or tweak the text of the comics, but they usually have a light touch (changing only the names, for instance) – the whole conceit here is that the comics work just as well when you imagine Trump delivering the dialogue.

And the concept works so, so well. This is the most perfect comics/culture mashup since Time is a Flat Circus. Check out the latest and greatest from Reddit’s r/DonaldandHobbes:

Some of these are high-quality photoshops, too. Look at how the one below uses a drop shadow to give Donald’s head a cartoon-like dark outline! This is a meme made with loving care by a talented memer. Truly professional grade.

I could do a whole Monday Memes of just these. I won’t, but I could.

Yep, that’s the original text of that comic.

This meme has actually been trucking along for a while now, though it’s enjoyed a bit of a renaissance lately. The older versions of the meme don’t have quite the same production quality, but they’re still dank as hell. Here’s the OG Donald and Hobbes meme, courtesy of Reddit user u/eucalyptusfire:

And here’s another older one that I’m just including ’cause I like:

This, people, is no garbage meme.