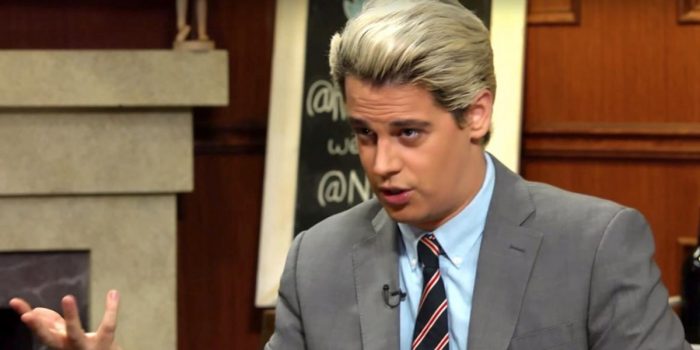 Update: CPAC has suddenly realized that conservatives don’t like pedophilia, and has rescinded Milo’s invitation.

“@ACUConservative has decided to rescind the invitation of Milo Yiannopoulos to speak at #CPAC2017.” pic.twitter.com/sVWGnPCW7C

The Conservative Political Action Conference will feature alt-right provocateur Milo Yiannopoulos as its keynote speaker, and people are not taking it well.

Yiannopoulos is a controversial figure closely associated with the alt-right movement. He’s emblematic of the tack his employer, Brietbart, made under then-editor and now-Trump adviser Steve Bannon.

Nobody on the left is a fan of Yiannopoulos, but he’s not exactly universally beloved on the right, either, particularly among old-school Republicans who remember the days when the party was in favor of free trade and family values (ca. 2015). So the news that he’d get more stage time than fellow speakers and more traditional conservatives like Vice President Mike Pence and Not-President Ted Cruz has gone over pretty poorly.

An unfortunate lapse of judgment, and true conservatism, for @mschlapp & @CPAC. Why have so many lost their bearings?https://t.co/grD7C42N6F

Conservative opposition to political correctness has turned into support for utter depravity, & the ACU is complicit in giving it a platform

Also going over poorly: comments Yiannopoulos made about underage sex and consent that some enterprising opponents dug up shortly after CPAC’s announcement. In the 2016 video, Yiannopoulos clumsily tries to draw a line between pedophilia and what he sees as non-pedophile relationships involving very young post-pubescent children. He pretty explicitly advocates for relationships between older men and children as young as 13. It’s a bad look. The weird shit starts at 58 minutes in.

As you might imagine, some cultural conservatives are pretty unhappy that their keynote speaker is pro-molestation.

Love him or hate him (and most people hate him), Yiannopoulos is certainly a pretty high-profile choice. His specialty is scheduling speaking engagements on liberal campuses. These tend to trigger hippies and spark protests: things burn, Yiannopoulos’ speech is cancelled, and then several thousand r/the_Donald subscribers get triggered by all the triggering and buy Yiannopoulos’ book. It’s a lucrative cycle, and it’s made an even bigger star out of Yiannopoulos.

The campus incidents seem to be what got Yiannopoulos this gig, too. Here’s CPAC’s chairman:

Jonah 1st amendment is dead on campus. Conservatives should fight back. As radioactive as milo is he is fighting back. https://t.co/grkdlGNBt3

Yiannopoulos told The Hollywood Reporter that his speech will relate his “experiences in America battling feminists, Black Lives Matter, the media, professors and the entertainment industry.”

CPAC is on C-SPAN February 22-25 and Twitter is gonna be pretty goddamn lit while it’s on.

Be the first to comment on "CPAC Tabs Milo as Keynote Speaker, Upsets Everyone [Update: CPAC Uninvites Milo]"