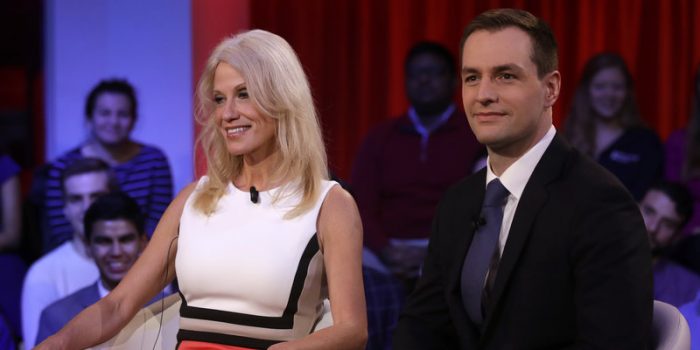 Who’s ready for a STAFFER FIGHT?

As part of their Campaign Managers Conference, Harvard University hosted representatives from the Trump and Clinton campaigns in a discussion of the 2016 campaign. It did not go well.

By all accounts, the discussion devolved into a shouting match between the two camps. Both campaigns slung insults and accusations across the 10 feet of space that separated them.

Clinton’s campaign made no effort to disguise their disgust for FBI Director James Comey’s late-campaign letter. Staffers also expressed frustration with the press, who they felt focused too much on Trump. Trump’s camp had their usual unkind words for the media. And then the campaigns turned on each other.

Things rose to a fever pitch during a discussion of the “Alt-Right” and Clinton’s speech on the subject. Clinton staffers accused Trump of stoking racial and ethnic fears in pursuit of victory.

“I would rather lose than win the way you guys did,” Clinton communications director Jennifer Palmieri said.

Somehow, it got worse. Check out this exchange:

Conway: Do you think I ran a campaign where white supremacists had a platform? Are you going to look me in the face and tell me that?

Palmieri: It did, Kellyanne, it did

Conway: And that’s how you lost?

Conway went on to offer a different reason for Clinton’s loss, claiming the candidate couldn’t connect with the working class because she “has nothing in common with anybody.” In the background, various voices chime in with insults – “pathetic,” “you guys are punching down,” and other fun things of that nature.

Clinton media strategist Mandy Grunwald did offer the Trump camp one “compliment.” “I don’t think you give yourselves enough credit for the negative campaign you ran,” she said, going on to describe it as “a very impressive gassing” of Clinton.